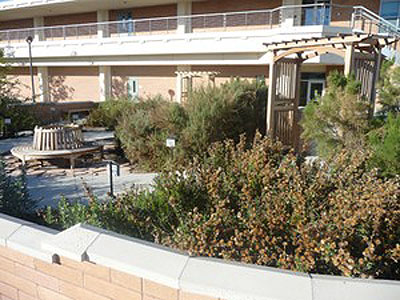 Take a Blackberry on a walk through this garden between Buildings 30 and 31 and Google the plant species identified by markers along the path.  The exercise can introduce you to a variety of plants with interesting characteristics.

The Monkey Flower, so-named because some people believe it looks like a monkey’s face, was used by native Americans as an antiseptic for treating cuts and bruises. Typically Monkey Flowers are orange in color, but hybrids have been produced in various colors and shades.

The oil of the flowers of the chamise is flammable, but even if it causes the habitat to burn, the chamise will sprout after the flames are out. The plant also was used for arrows made by the Luiseno people.

The Black Sage attracts not only butterflies but hummingbirds and quail. Glandular hairs on the plant are the source of its favorable smell.

No arresting qualities can be cited for the Sawtooth Golden Bush, except for the fact that it received its scientific name of Hazardia squarrosa in honor of California botanist Barclay Hazard, whose wife Alida G. Blake was an anti-sufragette. If she could cast a ballot it would have been against being able to do so.

The spiny red berry was another popular folk medicine; its bark was used to cure constipation. But don’t go chewing it, experts warn. The bark requires extensive pre-treatment.

Another species in the garden is the Toyon Berry, or Christmas Berry, which when cooked tastes something like cherries but when eaten uncooked can be poisonous. Brewed into a tea, the berry was used to cure stomach aches.

The laurel sumac is known by scientists as the Malosma laurina. Malosma is a word derived from the Latin word for “apple” and the plant is said by some to have an aroma resembling that of an apple. Others have compared its aroma to that of a bitter almond.

White Sage can start arguments. Conservationists wish people would leave it alone and let it thrive. But there is a market for White Sage among New Age devotees who like to participate in “smudging” ceremonies in which the aromatic sage is burned and its ashes are rubbed for purification purposes over a person’s body. Other Native American medicinal uses for the plant were as a deoderant, a salve, a snuff, an asringent, and a decongestant.

You can imagine what the Lemonade Berry is used for, although juice squeezed from the berries should be carefully strained. But additionally the plant is a good source of an oil like substance, which can be collected and made into candles.

Oh yes, California Native Plants can be decorative too. The drought-resistant Chalk Dudleya looks good in any succulent garden, and the San Diego Sunflower, when in bloom, can be a source of brightness and cheer.