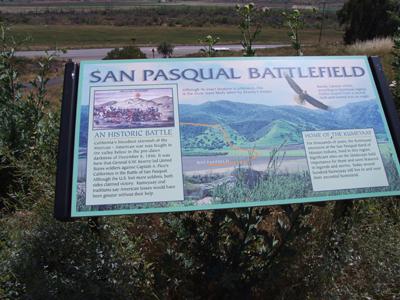 August 11, 2019 (San Pasqual) - When a U.S. Marine Corps detachment from the USS Cyane marched from the shore of San Diego Bay to the plaza in Old Town San Diego on July 29, 1846 and raised the American flag without serious challenge, thus ending  Mexican control over this city, someone must have thought, ‘Wait a minute! Isn’t this too easy?”

The answer to that question did not come until nearly five months later in the San Pasqual Valley,   which serves today as an agricultural preserve for the City of San Diego and the home of the San Diego Zoological Association’s  “Wild Animal Park.”

Not far from where tourists come today to view African animals making themselves at home in the California climate, a battle was fought on December 6, 1846,  between a force of lance-wielding Californios – who still were loyal to the government of Mexico—and a larger unit of U.S. Army soldiers equipped  with cannon, carbines, pistols and sabers.

About 190 better-armed Americans, a contingent of General Stephen Watts Kearny’s Army of the West, were pitted against 80 California vaqueros led by  Andres Pico.  However, these raw numbers don’t tell the whole story.   The Americans who had been traveling overland since September 25 from Santa Fe, were tired; they did not know the terrain.   On the other hand, the Californios were fresh and they were defending their homeland.

“What they were doing was a rally—you turn your horses, return to your rally point as quickly as possible, and spread out your enemy.  Once you get two-thirds of your group back together, you can then come back at them in an offensive way. … The Californios regrouped, spread out and then they came at them with their lances.”

The casualties were mostly American.  Nineteen Americans were killed outright, two were fatally wounded, and one was presumed missing and killed.

The Americans’  bodies lie reburied today at the Fort Rosecrans National Cemetery at Point Loma.  Casualties on the Californio side are a matter of historical dispute. Pico said that only one of his vaqueros was killed.  General Kearny reported that six were killed. U.S.  Navy Lt. Edward Beale’s after action report placed the number of enemy killed at 4, and Marine Corps. Lt. Archibald Gillespie said there were as many as 17 Californios dead.

Whatever the number, there were fewer of them than the American dead.

As more U.S. forces came down the hill, gathering into position and setting up a cannon – the Americans had two 12-pound Howitzers – the Californios melted away; Pico not seeing any advantage in continuing the battle against a numerically superior adversary.

About a half mile west of the visitor center, across the modern roadway from the battleground, is a ledge of land to which Kearny’s Army repaired to bury the dead and tend to the wounded. From here also he dispatched three men to get word to American forces in San Diego that help was required.  While watching from a safe distance away, the Californios caught the three messengers.

With no cattle, the Americans slaughtered some of their mules to eat – resulting in that hill becoming named “Mule Hill,” the name by which that  height in the modern-day city of Escondido is called today.

Under a white flag, Pico sent word to the Americans that he was willing to trade the three messengers he had taken prisoner for three prisoners held by the Americans.   The Americans only had one prisoner, but for historians, this incident made a crucial point: Pico had  not  been certain where all his men were.   So he could not have been positive that only one of his men had been killed.   An exchange was made.

Now aware that Commodore Robert Stockton in San Diego was unfamiliar with their desperate situation, Army Scout Kit Carson, Navy Lt. Beale and an unidentified Native American volunteered to sneak past the Californio sentries to get word of the siege to San Diego.  They traveled at night, tucking their boots into their belts to avoid being heard. Crawling past three cordons of sentries they lost their boots, and had to make the 30 mile, night-time trip  barefoot over rocks,  chaparral and cactus.  By day the men hid.  By the time they reached San Diego, their feet were bleeding and swollen.

Stockton ordered a relief force to come to the aid of Kearny, who meanwhile decided that his forces needed to leave the hill on Dec. 10 for San Diego, no matter what.  As they prepared to do so, they heard noises, issued a challenge, and heard back an answer in English – that 225 American sailors and Marines had arrived.

Once again, preferring to fight on another occasion, the Californios had withdrawn from the battle.  The two forces did not meet again until after the New Year.  In January, near modern-day North Hollywood, in the Cahuenga Pass, Pico capitulated, ending the California part of the Mexican War, which dragged on until the signing of the Treaty of Guadalupe-Hidalgo in 1848.  By that treaty,  Mexico ceded California and other parts of the modern American Southwest to the United States.

Today, historians debate who won the Battle of San Pasqual.  Some say it was Pico, because his local vaqueros overcame a better equipped, more numerous Army, and killed more men than he lost.   Others say it was Kearny, because ultimately his forces attained their objective of reaching San Diego.

Every December the Battle of San Pasqual is reenacted in a weekend of activity.   On the first weekend of each month during the rest of the year, volunteers dressed as U.S. Dragoons (precursors of the U.S. Cavalry), retell the story of the battle and, for good measure, demonstrate how Kearny’s cannons were fired. 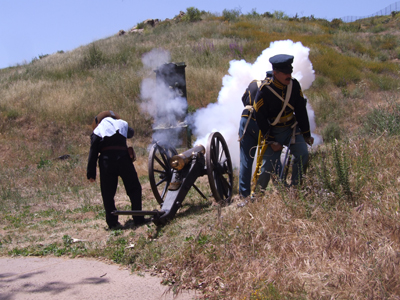