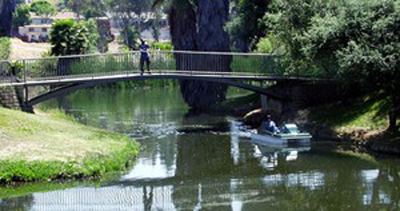 April 19, 2019 (Santee) - As you feed the ducks in the Santee Lakes, or watch naval enthusiasts sail radio-controlled model battleships and cruisers on its waters, or picnic along its shores, you may not realize that you are standing at a venue that back in the 1960s was a sensation of the water reclamation world and a magnet for delegations from parched countries everywhere.

Today, it’s not at all uncommon for cities to used reclaimed water for recreational purposes but a half century ago in 1959, when the Santee County Water District decided to reclaim water from sewage and turn it into lakes, it was a novel and controversial idea. However, with the neighboring City of San Diego charging more and more for the pipelining of treated sewage into the Pacific Ocean, the district’s director, Ray Stoyer, was able to persuade his board that creating the lakes would be less expensive economically and more beneficial for recreation-hungry residents of Santee, a small city east of San Diego.

There were some special geologic circumstances permitting Stoyer to envision his system of small lakes, chief among them the fact that the area he wanted for the project already had been mined for gravel down to the impervious layer of clay. Thus, there was no danger of the treated water percolating down to the ground water supply.

Another factor was that the man who owned the mined-out gravel pits, Bill Mast, was willing to donate the land to the district, which since has become known as the Padre Dam Municipal Water District. Mast was a good businessman. If the project were to be built, irrigation water could be routed from the lakes to the property he wanted to develop into a golf course, which today is known as the Carlton Oaks Country Club.

Up to the point it decided to create the lakes, the water district had been giving its sewage primary and secondary treatment. Primary treatment involves holding the sewage in a tank long enough to permit big particles to settle out and light particles to float up. The particles then are separated from the water and disposed of.

In secondary treatment, the water is pumped to another tank in which bacteria, kept alive by a constant flow of air, feed off the impurities, a process that further cleanses the water.

To be able to turn this water into lake water, suitable for fowl and fish, other processes needed to be introduced to remove both nitrogen and phosphorus from the wastewater. By pumping the wastewater from the secondary treatment tank to another tank, with a different population of bacteria, Stoyer was able to solve the problem of nitrogen.

Removing the phosphorus was a more difficult problem, but this was where the geology of the region came in handy. The district was able to pump the water to a gravel area lying upstream from the proposed lakes. Located on the same kind of impervious clay, these gravel beds could serve as giant filters, cleansing the water of phosphorus before it flowed by gravity into the lake system. In the first lake, the water would be allowed to oxidize by exposure to the air, then be pumped to the second lake for more oxidation, and finally to a third lake, which could be used for recreational purposes.

The engineering and most chemical problems solved, Stoyer next considered the public relations problem—how was he going to get the people of Santee to accept the idea of boating, fishing, and picnicking by lakes filled with water that once had been in their toilets? He decided to tantalize them by fencing off the lakes and using its waters to irrigate the grounds surrounding them with trees, grass and other plants. He also put in picnic tables which could be seen—but not touched—through the fence. And then he waited.

In Santee, summer temperatures can sometimes exceed 100 degrees. Sweltering in such heat, Santee residents saw the clear waters of the lake, the ducks and other water fowl splashing happily, the empty picnic tables, and began to question why they also could not take advantage of the lake. To which Stoyer replied in speech after speech promoting water conservation that only after the county Department of Health ruled that the water was absolutely safe for human contact could the district even consider opening it up. Stoyer thereby helped to create pent-up demand.

Dr. J.B. Askew, the health department’s director, announced opposition in 1961 to permitting boating and picnicking at the lakes following unsatisfactory sampling of the waters for bacteria. Ten years later, in his book “The Town That Launders Its Water,” author Leonard A. Stevens quoted Askew as voicing these concerns: “You cannot let children around a body of water before they are in it. At least their hands are in it, and the next minute their hands are in their mouths.”

Stevens reported that in discussions between the district and the health department, it was decided that “they would percolate the water from the oxidation pond through soil and then channel it into the recreational lake. After this, there would be little chance of pollution endangering human health.”

The system was constructed, the water was again tested, and Dr. Askew gave his permission for the lakes to be opened to the public in June 1962. Grand opening ceremonies attracted 10,000 people. The California Fish and Game Department meanwhile introduced some fish species into the lake to see which ones would thrive and which ones would not. After gathering its data, the department authorized Santee Lakes to have “fish for fun” programs, in which fish caught in the lakes had to be thrown back. After two years of further testing, the Fish and Game Department concluded fish taken from the lake were safe to take home and cook.

Step by step, the six lakes proved themselves the equivalent of freshwater lakes. A swimming pool, drawn from lake waters, was authorized. A small water park where children can cavort is a favorite feature today.

Today, the Santee Lakes no longer can accommodate all of Santee’s reclaimed sewage, so much of it is pumped to the San Diego Metropolitan Water District—the very agency whose charges back in 1959 prompted Santee officials to develop the lakes.

In his book, Stevens reported that during the development stages, the lakes became internationally famous. “The significance of what happened at Santee is pointed up by several name-packed guest books kept by Martin Poe, the project’s chief water pollution control plant operator. They show that thousands of official visitors have come to see the lakes from nearly every state in the United States and from thirty-nine countries. Many of the visitors are officials from local, state or national governments. They are also water pollution control engineers and scientists, journalists, students and other individuals interested in solving water problems. The dry lands of Israel and India are well represented in Poe’s books, for in these distant countries, as in southern California, water is so precious that using it to the fullest extent is absolutely essential.”

Today these lakes are taken for granted as pleasant places to while away a lazy afternoon.  Water historians record them, however, as key projects that encouraged acceptance of wastewater reclamation for recreational purposes.

I have lived close enough to walk to Santee Lakes for over 40 years.   Our family, now with grandchildren, has enjoyed many memorable times there.  Our daughter's 1st birthday party and first job working for the paddleboat operator were there.   After graduating from SDSU with a degree in Public Relations, she worked for the San Diego River Park Foundation and other environmental organizations.  The early years of our son's life were spent bicycling around the Lakes and most likely inspired him to go on to mountain biking.   Fishing has always been a part of our family time together.   Now our grandchildren are making new memories of their own there.  I hope Santee Lakes will always be around for everyone to enjoy as much as our family does and motivates others to develop the same elsewhere!   Great article!