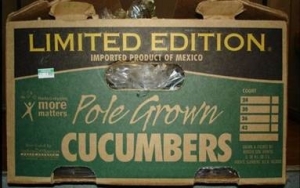 September 4, 2015 (San Diego)--A 99-year-old San Diego woman who died on Aug. 17 is part of a national outbreak of salmonella Poona that has been linked to imported cucumbers, the County Health and Human Services Agency (HHSA) announced today.  A San Diego-based importer of cucumbers from Mexico has been identified as the likely source.

The woman, 15 other San Diego residents and three visitors to the county are part of a multi-state outbreak of salmonella Poona, which has sickened 285 people in 27 states according to the Centers for Disease Control and Prevention (CDC). Most of the reported illnesses occurred in August. However the outbreak is ongoing and more cases are being reported. Approximately one-third of those who were ill have been hospitalized and the San Diego resident is the only reported death.

Investigations by HHSA in partnership with the County Department of Environment Health, CDC and multiple local and state health departments are currently underway. Cucumbers imported from Mexico by Andrew and Williamson Fresh Produce (A&W) in San Diego have been identified as a likely source. Other sources are under active investigation. Domestically grown garden cucumbers, English cucumbers, and Persian cucumbers are not linked to this outbreak.

A&W has initiated a voluntary recall of all cucumbers sold under the Limited Edition® label during the period from Aug. 1, 2015 through Sept. 3, 2015 because they may be contaminated with salmonella. People who bought these cucumbers should throw them away. View pictures of the recalled products.

“When in doubt, throw it out,” said Dr. Wilma Wooten, M.D., M.P.H., County public health officer, if consumers are unsure whether cucumbers they have were distributed by A&W. “Anyone with salmonella symptoms such as nausea, diarrhea, fever and abdominal cramping should seek medical attention.”

The CDC estimates that various salmonella strains cause one million illnesses in the United States each year, with 19,000 hospitalizations and 380 deaths. Although salmonella is a frequent bacterial cause of food-related illness, salmonella poona is relatively uncommon. Salmonella poona causes the same illnesses as other species of salmonella.

Salmonella symptoms include nausea, vomiting, diarrhea, abdominal cramps, and fever. Symptoms generally begin to occur 12 to 72 hours after eating tainted food, and illness from salmonella lasts about four to seven days. Most people recover without treatment.

People who are at higher risk for serious illnesses from salmonella include:

The most common sources of salmonella infection are undercooked poultry, eggs and meat. Various fruits and vegetables have been associated with salmonella outbreaks in the past. Pet birds, turtles and reptiles can also transmit the disease.

To prevent illness, you should wash your hands thoroughly with soap and water prior to preparing or eating food and after using the bathroom. You should also use separate cutting boards, plates, and utensils for raw produce and for raw meat, poultry, seafood and eggs. Salmonella can be killed by cooking foods to an internal temperature of 165 degrees Fahrenheit.