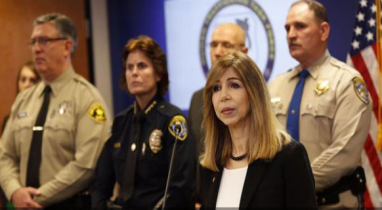 August 20, 2017 (San Diego) – “What we saw in Charlottesville is a bunch of thugs, bullies and criminals masquerading behind the freedom of speech,” said newly appointed San Diego District Attorney Summer Stephan in a statement issued today, referring to white supremacists who rallied in Virginia, a gathering that included Nazis and Ku Klux Klan members armed with guns, chemicals, and other weapons.

Stephan also vowed to make prosecution of hate crimes a priority locally and noted that such crimes are on the rise.

“I wish we could say that the hateful words and murderous actions in Charlottesville are a fluke or aberration, but we can't and we shouldn't view it as if we are at a safe distance in San Diego,” she revealed. “The latest statistics from the California Department of Justice show an 11 percent increase in hate crimes in San Diego County.”

Stephan added, “Fighting hate crimes is a priority for me and the District Attorney team, just as they are a priority to our law enforcement partners. We have a team of experts who prosecute hate crimes and who understand the impact on victims. Whenever hateful words or motives are combined with criminal actions, this office will prosecute to the fullest extent allowable by the law. We will not stand by and allow anyone to suffer abuse because of their race, religion, gender, sexual orientation or for any other reason.”

She urged the public to report suspected hate crimes if you witness one.

Hate crimes are defined by law as crimes that are committed against individuals or groups or property based on the real or perceived race, religion, gender, sexual orientation, disability, national origin, or ethnicity of the victims.

The San Diego District Attorney’s office has a Hate Crimes Unit within its Special Operations Division.

Victims of hate crimes suffer fear, stress, and may be afraid of reprisal or escalation of violence.

If you are a victim of a hate crime, the D.A.’s Hate Crimes webpage offers this advice:

http://www.urbandictionary.com/define.php?term=alt-left Popular definitions: If a liberal speaker uses the term "Alt Left", it refers to Democrats outside of the "Progressive" wing of that party. These "Alt-Lefters" feel they were not part of the debacle of the 2016 Presidential Election because they were shut out by the Democratic National Committee (DNC) "Limousine Liberal Elite", and their Communist-inspired "Cronies". If a conservative-tending speaker uses the term "Alt-Left", it refers to an often-violent subset of liberals infected with equal parts socialism and anarchy. These "Alt-Lefters" show their masked faces at nearly every Republican gathering for street-fighting, rioting, looting, vandalism, and other forms of violent protest. Frequently they are tied to hate groups like "Black Lives Matter", "AntiFa" and similar.

more hysteria and one sided
so antifa is blameless? there is no violence on the left? did the da and this web site conveniently forget the assaults and hate from antifa in Charlottesville, perhaps the assaults on police officers in Boston is not important either. perhaps that even the NYT has said they are a violent group

sadly the continuing hysteria over a non existent issue continues show the lack of anything positive on the left. no ideas, only shut down free speech and thought. they pull david duke out and then scream about what he says. the only people who give the guy publicity is the media. let him stay in his hole is he is so bad. in reality, he and the kkk couldn't fill a small stadium with members.
the left is loosing the People.
polls are showing this issue like the pretend russia issue is fake news and the majority of voters want to fix the economy, get rid of obamacare, secure the borders and end the endless wars.

all crime is bad. indeed report real crime to the authorities and witnesses please testify. otherwise time to move on to real issues.

and fish boy , time for a new shtick

now I see the times has differing opinions regarding antifa.

Alt Right: A Primer about the New White Supremacy
https://www.adl.org/education/resources/backgrounders/alt-right-a-primer...
.