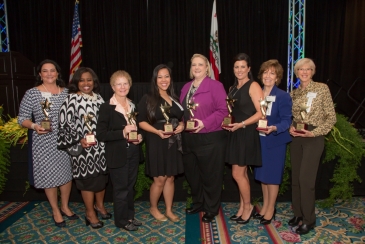 September 26, 2017 (La Mesa) – The San Diego East County Chamber of Commerce recently honored eight women with 2017 Women in Leadership Luncheon (WILL) awards. Now in its 15th year, the annual WILL event honors women for their outstanding leadership, exemplary character and integrity in the community, as well as their efforts to empower women to succeed and prosper in life and business, Chamber officials said. The awards event was held Friday, Sept. 22 at the Town and Country Resort Hotel in Mission Valley

Bergquist co-founded Connected Women of Influence in June 2008. Connected Women of Influence is a private, for-profit, invitation-only membership professional association for women who lead people, projects, teams and companies in business-to-busienss sectors. She also is a co-founder of SUE Talks (SUE is an acronym for Successful, Unstoppable, Empowering). She also is a founding partner of Women Lead Publishing, a book publisher, and Women Lead Magazine.

Black joined Junior Achievement (JA) of San Diego County in September 2015 after a 35-year career in banking, financial services and sales management. To ensure students are ready for the “real-world,” JA provides financial literacy programs to 81,000 students annually by teaching them how to get a job, start a business and manage their money. The nonprofit is home to the popular McGrath Family JA Biz Town, a mini-city where fifth-grade students discover how to start and run a profitable business. With the support of 6,300 volunteers, a staff of 40 and an annual budget of $4 million, JA delivers relevant, hands-on experiences that give students from kindergarten through high school the knowledge and skills to succeed in today’s competitive global economy.

Costa has worked in the solid waste and recycling industry since 1999 and oversees municipal relations for Waste Management in East County. She is a board member with the San Diego East County Chamber of Commerce, Santee Chamber of Commerce and Boys & Girls Clubs of East County. Since 2009, she has been actively involved with Mothers Against Drunk Driving following the loss of her husband Eddy Costa to a drunk driver in 2008.

King co-founded King Schools, offering aviation instructional video and online courses, with her husband John King in 1975. With a folksy, humor-rich approach in their training videos, Martha is considered one of the most recognized experts in flight instruction. King Schools is credited with making aviation knowledge more accessible to pilots worldwide. It’s believed that nearly every pilot has taken a King course at some time during their certification training and about half of each year’s crop of new private and instrument pilots in the U.S. have learned using King Schools’ educational materials.

McKinney joined the local American Red Cross chapter in May 2015. She works with external partners, corporations, individual donors, volunteers and others to raise funds that advance the organization’s mission, including disaster preparedness support, emergency relief efforts and services to members of the Armed Forces and their families. She has more than 25 years of marketing, sales and fundraising experience in both the financial services and nonprofit industries.

Rush founded Breast Imaging Specialists in 1998 after several years of working directly with patients using mammography for early detection. She consults in the implementation of the Mammography Quality Standards Act (MQSA) to advance quality in mammography. She is the author of “MQSA Made Easy,” a manual for mammography professionals. Rush has served on the local, state and national level with numerous organizations to aid in development of standards and to advance early detection for all women. Rush also was honored by the Chamber for her contributions in healthcare with the Michele Tarbet Healthcare Award, named in honor of the former CEO of Sharp Grossmont Hospital who passed away in July 2014.

Ryan, with six grown children and 17 grandchildren, has worked at Rady Children’s Hospital - San Diego (RCH) since 1990. She is responsible for the management and coordination of the hospital’s activities and relationships with political, government and legislative bodies. She has been a public official since 1979, when she was first elected to the Santee School District board of education. She is currently serving her 10th term. She also has served on the executive committee of the San Diego School Boards Association, a nonprofit that offers training to school districts.

Tran has been a registered nurse for 13 years with extensive training in emergency and trauma nursing. She has volunteered on medical missions with the International Red Cross, United Nations, U.S. Navy and various nonprofits for the past 10 years. She has traveled to Haiti and Nepal after earthquakes in both nations. These experiences has led to her founding Venture to Heal Medical Missions, a nonprofit that organizes medical professionals and laypersons to medical missions in third-world countries.

The keynote speaker was entrepreneur Jenny Amaraneni, co-founder and CEO of SOLO Eyewear, a company that creates ecologically friendly sunglasses made from recycled materials. The company said 10 percent of its profits are used to fund eye exams, eyeglasses and cataract surgery for people in need around the world. To date, more than 13,000 people have had their vision restored through her efforts. Event emcee was Lee Ann Kim, founder of the Pacific Arts Movement.