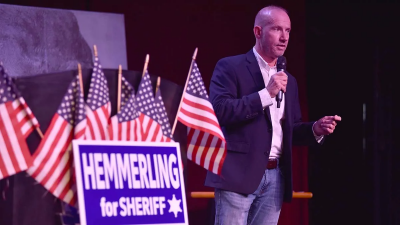 September 27, 2022 (Ramona) - The San Diego County Republican Party and the state GOP agree: Voters should reject Proposition 1, which would make abortion a constitutional right in California.

Democrats are a universal “yes” on Prop. 1. And a recent poll suggested that 69% of likely voters would approve this legislative constitutional amendment.

But in the wake of the Supreme Court overturning Roe v. Wade and GOP Sen. Lindsey Graham proposing a national abortion ban, the divisive issue has grown even hotter.
So how did Republican candidates on stage Saturday at the American Liberty Forum in Ramona address the issue?
They didn’t.
Times of San Diego interviewed two, however, and secured an email statement from a third — demonstrating a split in conservative ranks.
Corbin Sabol, a 32-year-old Navy veteran challenging Dr. Akilah Weber in the 79th Assembly District, said he opposes Prop. 1 because “life begins in the womb and it’s in the Constitution that says we have a right to life. You can’t murder life.”
Robin Joy Maxson, a 61-year-old Ramona community planner running for the Palomar Health board, was less adamant. She said she hadn’t read Prop. 1.
But the GOP-endorsed candidate ultimately agreed that a scenario exists where a woman, with consultation with her doctor, should have the freedom to abort a fetus.
County sheriff hopeful John Hemmerling, who declined to support the Families First Pledge and its anti-abortion stance, takes a third path: He won’t announce a stand on Prop. 1.
“As sheriff,” he said via email, “I pledge to provide fair and unbiased law enforcement to all 3.3 million people in San Diego County, regardless of their personal beliefs on religious and social issues that are not related to public safety. That is why I do not intend to take any position on state propositions or proposed federal legislation related to abortion.”
He explained why he backed away from the Solana Beach-based Salt & Light Council’s pledge:
“I support family values in general, but after discussion with proponents of the pledge, I realized they intended a much more narrow adherence to a social agenda than I felt was appropriate, especially for a sheriff who will represent all of the people.”
Nearly two dozen San Diego County candidates in the 2022 election cycle signed what is sometimes called the Biblical Voter Families First Pledge, which includes a vow to “vote to protect innocent human life from conception to natural death.”
Signers include Rep. Darrell Issa in the deep-red 50th District and congressional candidates Tyler Geffeney (52nd District) and Brian Maryott (49th District). Board of Supervisors candidate Amy Reichert, who revealed in February that she had an abortion at age 15, also signed the anti-abortion pledge.
First-time candidate Sabol and state Sen. Brian Jones signed the pledge as well.
(The Salt & Light Council didn’t respond to requests for comment. Neither did county GOP chair Paula Whitsell.)
Click on photos to hear interviews on Prop. 1 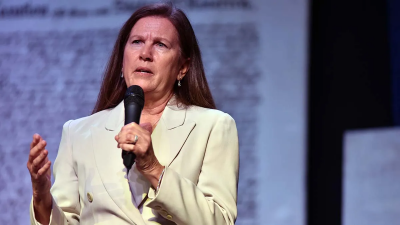 Photo, right:  Robin Joy Maxson, running for the Palomar Health board, would allow for an abortion after consultation with doctor. Photo by Ken Stone 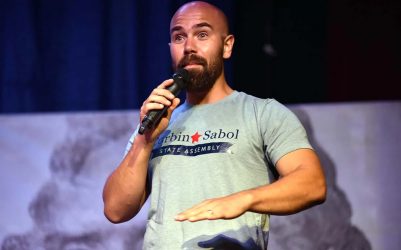 Photo, left:  Corbin Sabol, challenging a medical doctor in the 79th Assembly District, opposes all abortions. Photo by Ken Stone
In brief chats Saturday with Times of San Diego, healthcare board candidate Maxson and Sabol also reflected the nuances of the abortion debate.
Maxson resisted taking a stand on whether state or national law should ban or affirm the right to an abortion, saying it shouldn’t be a legislative matter. It’s a private decision — a “discussion between a doctor and a woman and a baby.”
Further, she said that medical advancements would eventually render abortion a “non-issue,” because of “effective birth control combined with being able to have babies surviving earlier and earlier.”
When asked if there were any scenario where a woman and a doctor agreed that it’s necessary to have an abortion and nobody would be punished, she said: “Absolutely, yes.”
Sabol, who is challenging a board-certified obstetrician/gynecologist in Weber, was absolute in his anti-abortion stance.
He wouldn’t allow for an exception for rape or incest.
“It sounds tragic,” he said of such pregnancies. “It’s horrible. … but there’s still life in that womb.”
Would he support punishing the mother as well as the abortion provider if such a procedure were banned?
“That’s a good question — I haven’t thought of before,” Sabol began. “But I don’t think I would agree with penalizing the mother. … We need to promote a culture of life, not just ban abortion. We can promote a culture of life.”
But he doesn’t want a national law banning abortion, agreeing with the high court that it should be left to the states.
Sabol said he was raised a Roman Catholic but fell away from organized religion.
“I’m a firm believer in God, Christian values,” he said. “I’m still a God-fearing man.”

"the Constitution that says we have a right to life.". . .he made that up. The Constitution describes the US government structure, and also prohibits that government from messing with a few of our human rights, and does not "deny or disparage others retained by the people." . . . Sabol should read it.
that all men are created equal, that they are endowed by their Creator with certain unalienable Rights, that among these are Life, Liberty and the pursuit of Happiness." . . .Now let's be fair and say that women also have these Declaration rights. Is that too much to ask?