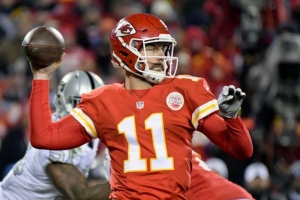 October 4, 2017 (San Diego) - No high school stars last month, but there were plenty of pro and amateur stars that made the cut.

Leading the Chiefs to a 3-0 start, Smith completed 77.4 percent of his passes (65-of-84) for 774 yards and seven touchdowns—a staggering 132.7 quarterback rating. In the three victories, the former Highlander did not toss an interception as the Chiefs jumped on top in the AFC West.

Given the opportunity to save eight games, Hand was almost perfect, converting seven with a 2.38 earned run average. Hand did not allow a run over his final nine appearances and 9.1 innings, striking out 13 batters while walking just one.

Winning the MWC Offensive Player of the Week four times, Penny rushed for 823 yards on 116 attempts, scoring seven touchdowns. He added 14 receptions for 199 yards and a pair of TDs not to mention five kick returns for 203 yards and still another touchdown in leading the Aztecs to their first 5-0 start since 1975.

The El Cajon native fired scores of 67, 67, 74 and 75 on four different courses at the Mission Hills Country Club and Westin Mission Hills for a 3-under par 283 to capture the Golf Channel Am Tour’s Senior National Championship. Sivadge’s score was 11 strokes better than the runner-up as he became the first San Diegan to win the event.

Now that conference play has started, Lawrence is hitting his groove. The Toreros are 2-0 in the conference and 3-2 overall with Lawrence completing 103-of-165 passes for 1,271 yards and 10 touchdowns. The junior has also rushed for a touchdown.