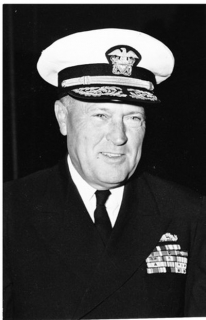 His son, also named Wilder Baker, replied in a telephone interview from Darien, Connecticut, that in the U.S. Navy, Admiral Baker perhaps was best known as the chief of staff to Admiral John S. McCain, whose grandson, John McCain, became a senator from Arizona and the 2008 presidential candidate.

Admiral Baker (1890-1975) was among the senior officers in the theatre at the time of Japan’s surrender in 1945, having led a task force that attacked the Japanese home islands. Before the U.S. entered World War II, he helped develop tactics for anti-submarine warfare while escorting American convoys to England and dodging German U-boats.

For all the wartime action he saw, it was Admiral Baker’s peacetime role as the commandant of the 11th Naval District that resulted in his name being immortalized at the recreational facility located on what had been a portion of Camp Elliott.

When the postwar decision was made to designate a portion of Camp Elliott as Miramar Marine Corps Air Station and to decommission other portions of the camp, Baker urged that a portion of the facility be set aside for the recreational needs of active duty military personnel and retired members of the Armed Services. Over the ensuing decades, Miramar was turned over to the Navy, and then back to the Marine Corps, while decommissioned portions of the huge base eventually were developed into the community of Tierrasanta and left in its natural state as Mission Trails Regional Park.

Baker retired with the rank of vice admiral in 1952 and joined the senior management of Solar Aircraft for several years thereafter. He became active in civic affairs, particularly as president of the San Diego Symphony, and as a board member of the Community Chest (United Way), Scripps Clinic and YMCA, said his son, an East Coast advertising executive who today owns an advertising consultant agency.

The admiral loved to play golf “but you didn’t want to emulate it,” his son chuckled. “He was a hacker. … One of the stories was how he once shot a hole in one—it was up at Mare Island (in the San Francisco Bay area) off a water tower.”

Whether the story of the fortuitous ricochet shot is true or apocryphal, it is an accurate description of the admiral’s game, said his son.

The admiral and his son played together several times on the golf course bearing his name. “It started as a nine-hole course, mostly dirt,” the son remembered. It grew to 18 holes and then a second course was put in.

Another of the family’s favorite stories about the admiral concerned a time they went up to a favorite vacation spot on Squam Lake in New Hampshire. “He was still on active duty, and people knew he was an admiral,” his son said. So you can imagine the townspeople’s amusement the day that “he went down to get in the canoe, but let the boat slip away from the dock (with his foot still on it) and fell into the lake.”

The townspeople used to tease the admiral about the incident, but he took it in good grace. In the military, subordinates used to say that he was “direct” in his approach to people and fair, his son said.

When the admiral lived at North Island Naval Air Station, he liked to shoot skeet and often tried to get his son to come along. But the younger Wilder Baker wasn’t fond of that sport, “so he would get hold of a friend of mine who lived in Coronado, Nick Reynolds,” who became famous as a member of the Kingston Trio.

Wilder Baker said he was pleased to learn that Admiral Baker Field now is cooperating with the Audubon Society for the protection of wildlife species and the ecology.

Coincidentally, he said, his own wife, Vanda, is on the committee of the Weebern Country Club in Darien working to have that facility likewise certified in the Audubon Cooperative Sanctuary Program for Golf Courses.

Dad used to take us as kids where the east end of the golf course presently stands. It is worthy to note that WWI aircraft used the open area as a bombing range, and we stumbled over several un-exploded bombs of that time. Teen years he took us golfing on the first course there and I was noted for throwing the clubs further than I could hit the ball.