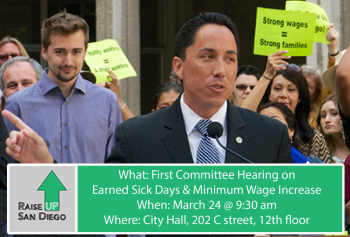 March 19, 2014 (San Diego) – Should workers have the right to earned sick days? Should the minimum wage be raised in San Diego?  A City Council committee will hold a hearing on these issues on Monday, March 24 at 9:30 a.m. at City Hall.

A new organization, Raise Up San Diego (www.raiseupsandiego.org) will hold a rally outside Council Chambers at 202 C Street in support of these proposals.

“Come be  part of history as the Improving Wages and Working Conditions measure is introduced at the Economic Development and Intergovernmental Relations Committee,” an e-mail invitation from the organization states.

A recent report found that the majority of workers in San Diego do not have paid sick days, including most employees in the food services industry, making that issue a concern for public health as well as the health of employees.

Those in favor of raising the city’s minimum wage note that the cost of living in San Diego is far higher than many other places, thus the minimum wage is not enough to live on.

Such measures have typically drawn opposition from business organizations, who contend that increased costs could be burdensome to business owners.