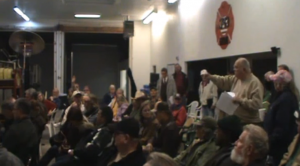 February 10, 2014 (Boulevard)--Yesterday, we reported how three authorities state Soitec's consultant is wrong, Boulevard does not possess enough water for their proposed solar project.  Now a video from the February 6  community meeting, at Boulevard, reveals that Soitec's consultant, Dudek, recently underestimated the amount of water needed at SDG&E recent ECO substation project by  more than three times what would be the final total. (The original estimate was 30 million gallons and the actual amount was closer to 100 million gallons.) Dudek is also alleged to have seriously underestimated the amount of water needed for the  Ocotillo Wind Project. If this is true, how can  we assume that Dudek's estimates for the Boulevard project are correct?


Since this article was first printed, a staffer at the County Supervisors' office has said, "The county has a groundwater geologist on staff whose job is to sort through all the data provided by all the sources on a proposed project. On Soitec, which requires a groundwater study, the geologist will examine what the developer provides, along with any other studies and related public comment. The county expert will determine the technical accuracy of all the information in front of him. His assessment will be part of the overall package of information that county staff will eventually present to the Board of Supervisors, before it decides whether or not to grant Soitec a major use permit."

In the video, Jacumba Sponsor Group Chairman Howard Cook, speaking as an individual, points to number of seeming omissions from Dudek's estimate for the amount of water needed in their proposed solar project for his community.

Jim Pelley, an Ocotillo resident and photojournalist, said that Dudek also did the enviornmental review on the Ocotillo Express Wind Facility -- and that the wind project used five to six times more water than Dudek estimated.

After these omissions were revealed, someone read out a letter in which the area's well water pump service  listed some of the water problems the district has been experiencing during the last two decades.

At one point the author stated, "There is something very wrong in selling water for industrial use, considering projects requiring millions of gallons of water usage, and promising allocations of future water supplies at a time when we are witnessing such destruction from LACK of water."

Then Donna Tisdale, Chair of the Boulevard Planning Group,  and other local residents proceeded to grill Soitec's representatives with some tough questions ...

It is obvious that most of the people at this meeting do not want the solar projects to go forward. If they were in England, where local communities like Boulevard have the power to veto projects going into their midst, this story would probably be coming to an end. As this is the US, the final decision will be made elsewhere.