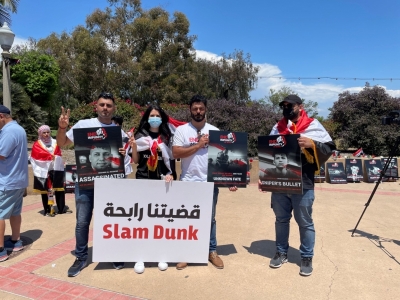 Photo:  Othman Al-Kusairy (far left) and Sally Bachori (middle left), Ahmed (to the right of Sally) and Sam (far right) stand with other Iraqi organizers and signs in memory of lives lost

July 23, 2021 (San Diego) -- A group of Iraqi organizers held a protest in Balboa Park last Sunday. The group calls itself “End Impunity in Iraq” and is calling for accountability.

The International Committee on Missing Persons estimates between 250,000 and a million people have gone missing in Iraq over recent decades.

Protesters held photos of people who have been killed or went missing recently, saying their names and reasons for being killed.

The list of the deceased includes all ethnicities, genders, occupations, and religions.

According to Amnesty International, from Dec 2019 onward, peaceful protesters have been unlawfully detained or killed by Iraqi Authorities.

Almost a year after this statement there still has been no accountability. 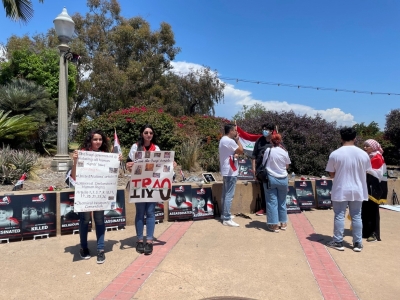 “Innocent people…they killed them and no one’s getting charged with this,” said Othman Al-Kusairy, one of the supporters who is originally from Baghdad.

Al-Kusairy says the group wants help from the U.S. government to “stop the government” in Iraq.

Iraqi Prime Minister Mustafa al-Kadhimi is scheduled to visit President Joe Biden next week. Al-Kusairy and other organizers are hoping to get Biden’s attention before this visit.

“We have on our posters here, as you see, they’re pictures of our martyrs that have been killed for basically asking for living in Iraq safely, for their basic human rights… Their killers have still until this day not [been] identified, not revealed to the public, not persecuted,” said Sally Bachori, another organizer.

Bachori added that the protest was asking for their killers to be tried and brought to justice.

San Diego’s East County is home to about 60,000 residents who originate from the Middle East. Our region  is one of the largest resettlements of Iraq war refugees in the United States.

The group plans on hosting future events and is planning a larger protest in October.