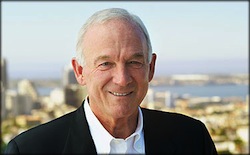 May 7, 2013 (San Diego) - With the recent completion of a state audit of the City of San Diego Development Services Department, United Food and Commercial Workers Union Local 135 President Mickey Kasparian calls for the City of San Diego to take action, based on those results. “In light of the finding by state auditors, our city has no choice but to take extreme action on the Walmart project in Sherman Heights,” demanded Kasparian. “The clear violations of City codes and procedures, possible ethics violations, and a complete lack of transparency, are stunning in their magnitude.”

“Former San Diego Mayor Jerry Sanders and his Administration are completely responsible for this mess,” said Kasparian. “An historic site was demolished under his watch. San Diego and its citizens deserve better.”

“The Walmart construction site in Sherman Heights should be closed and their permits should be revoked,”. Kasparian went on to state. “Walmart has recently been accused of bribery scandals in Mexico and India. We need to know the truth here in San Diego as well.”

Walmart said the political contributions were part of the company's strategy to support community issues, the U-T San Diego reported.