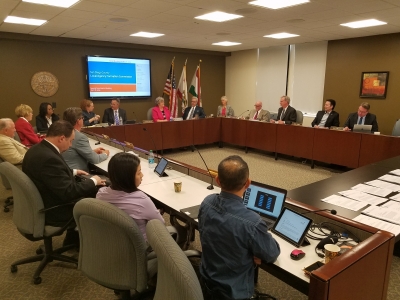 Friday Superior Court ruling nullified initial application to dissolve district
By Paul Kruze, Contributing Editor
JCFPD Court Documents and Griswold Letter Link
Complaint
Video
April 9, 2019 (Julian-Cuyamaca) - Just when you might figure the drama over the future of the Julian Cuyamaca Fire Protection District (JCFPD) is over, after Monday’s vote by the San Diego Local Agency Formation Commission (LAFCO), it would appear it is only starting. This time around, there is one more player in the game, and volunteers are occupying the fire station until at least through Wednesday.

In an unanimous 8-0 vote, LAFCO on Monday voted to dissolve the JCFPD after the recent election ordered by San Diego County Supervisors last December. By a slim majority of 113 votes, district voters indicated that they wanted to abolish the JCFPD and have the County Fire Authority and CalFire take over emergency services in the mountain town.

But soon after LAFCO’s vote, San Diego attorney Cory Briggs, JCFPD’s attorney, announced the filing of a lawsuit seeking to block the transfer. The suit alleges Brown Act open government violations should void the LAFCO process. LAFCO’s staff counsel acknowledged receiving a letter from an attorney for the Kumeyaay land trust, Ted Griswold of the law firm Procopio, saying that with the action of dissolving the JCFPD, the Cuyamaca station was now Kumeyaay property and could not be taken by the County without negotiations.

LAFCO Commission Counsel Holly Whatley verbally disputed the claim and said that the state law allows the county take possession of the fire station in dispute.

The members of LAFCO also discussed but then turned down the possibility of continuing the vote for at least a week until the key issues were to be decided.

San Diego Superior Court Judge Randa Trapp ruled that the previous JCFPD board violated the California Brown Act law relating to citizens attending a public agency meeting, disallowing a secret ballot vote, and the reporting of the results of a meeting. As related to the action against the JCFPD, this question was apprised by the court where the complaint alleged a secret ballot of the majority of the board members to dissolve the district on or about Jan. 30, 2018.

To ensure that her order is carried out, Judge Trapp wrote, “This Court shall retain jurisdiction over Respondent, including by way of a return to this peremptory writ of mandate, until this Court has determined that Respondent as complied with the acts encompassed by the foregoing order.”

She also ordered the JCFPD to file “a return to this write no later than twenty (20) days from the date this writ is issued and served setting forth what Respondent has done to comply with the write set forth herein.”

The letter sent last week to LAFCO Executive Director Keene Simonds by Griswold states that one of the JCFPD stations sits on property owned by the Frances H. Mosler Trust. In spite of the County recording the property as its own, the trust says that if the JCFPD is dissolved, the land is to revert to the Kumeyaay Diegueño Land Conservancy.

Griswold said to Times of San Diego, “Discussion with the trustee, Claudia Powell, and her attorney, K.C. Thompson, indicate that the trustee intends to redeed the property to the Native American Land Conservancy.”

In the letter, Griswold directly quotes from the trust document which says, “if District permanently abandons the fire station, title to the subject property shall automatically vest in the [Native American Land] Conservancy or the Conservancy’s assignee of this right of reverter, (Fiduciary’s Deed to Real Property recorded on June 11, 2009 at the San Diego County Recorder’s Office, as Document no. 2009-0316332).”

Griswold also says that “if the JCFPD abandons the property by means of dissolution of the organization and any government agency such as the San Diego County Fire Authority or Cal Fire attempts to take possession of the property or the fire station, such possession will constitute trespass and taking without just compensation.”

Following the decision by LAFCO, members and supporters of the JCFPD, returned to Julian and began occupying Fire Station. The action was partly prompted by an action on Monday at approximately 9 a.m. when armed CalFire and Sheriffs deputies attempted to take Station 56 by force.

Early Tuesday morning, JCFPD Battalion Chief Brian Crouch reportedly came out of the fire house and ordered the security detail to leave the station property because of them possessing guns. The detail complied and retreated. ECM’s source did not know if the detail secured their firearms.

The volunteer firefighters plan on staying inside the station until at least Wednesday.

While local media has likened the action by volunteers as a “sit in,” a ECM source said via text messaging, “It is not a sit in. Our volunteers are still here for the town. Still pulling their shifts even though they are not dispatched. [We are here] in case there’s a walk-in.”

In a statement released to ECM by her assistant, Steve Schmidt, after ECM had received reports of an armed CalFire security detail outside of the fire station, Jacob said, “Cooler heads need to prevail. A sit-in that disrupts the operation of a fire station only jeopardizes the public’s safety. I urge those who continue to oppose dissolution to respect the process that has played out so far, including the recent election, and seek other ways to challenge the issue that don’t [sic] put the public at risk.”

Jacob refused to specifically address ECM’s question about CalFire under of the jurisdiction of the County of San Diego Fire Authority using a security detail with loaded firearms in front of the fire station.

Simonds referred all questions to its legal counsel, who did not return ECM’s call. 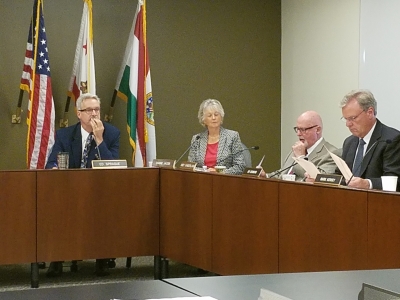