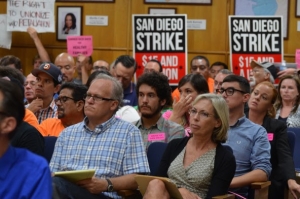 October 20, 2014 (San Diego)--If you’re a minimum wage worker in San Diego, the raise that the City Council voted for won’t be taking effect after all – at least, not until voters weigh in on the June 2016 ballot.

After Council voted to raise the minimum wage citywide starting in January, corporate and business interests opposed to the wage hike hired paid signature gatherers and collected enough signatures to qualify a ballot measure that would  repeal the minimum wage hike.

The increase in wages previously approved by City Council is now blocked until voters weigh in.

In response, the City Council on Monday voted unanimously to put the matter on the ballot, since their only other legal option would have been to rescind the wage hike.

The Council wants to raise the minimum wage to $11.50 an hour starting in January 2017, with future increases indexed to inflation annually.

If voters opt to raise the minimum wage, City Attorney Jan Goldsmith says employers might have to pay the increased wages retroactively to January 2015, the date when Council originally approved the minimum wage increase to take effect, 10 News reports.   The City’s plan would also give five paid sick days a year to all full-time workers.

Todd Gloria, author of the bill to raise the minimum wage, says people are struggling. “We can’t leave them behind while the cost of living continues to increase,” he adds.

Having the minimum wage issue on the ballot is expected to motivate Democrats to turn out at the polls, a move that could cost Republicans in the June 2016 presidential primary election.