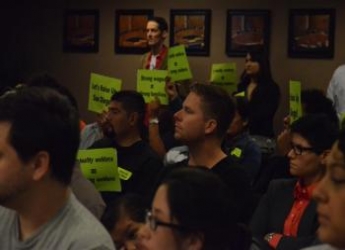 The committee approved the motion 2-1 on a partisan vote, with Councilmembers Marti Emerald and Sherri Lightner  voting for it and Councilman Mark Kersey against it.  Next, the City Attorney will draft language and return to the Committee. If approved, next the full City Council would need to pass the measure before it can come before voters.

The public weighed in with testimony.  Labor interests voiced support while business groups opposed – each claiming opposite impacts on the local economy if the measure should become law.

According to the brief provided by Robert Nothhoff and Claire Crawford of the Center on Policy Initiatives this proposals would have benefits for both employers and employees.  Employers would see increases in worker productivity and savings due to reduced turnover. Employees and their families would benefit by a boost to income and restoring work family balance.  The public would also benefit from a boost in the local tax base through “increased purchasing power” and health care costs would be reduced. 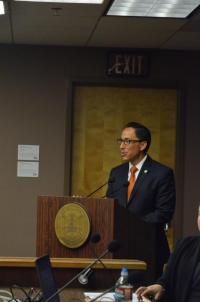 San Diego would be joining a national trend, starting with the city of Baltimore in Maryland back in the 1990s, in raising minimum wage to meet local conditions. These efforts have been seen across the West in recent electoral cycles.

For example, the City of San Francisco passed similar legislation in 2003, and has since been indexed to the inflation rate in San Francisco, The result is that San Francisco’s minimum wage stands at $10.55/hour. The sky has not fallen, and the worst predictions have not come to be, according to the book When mandates work: raising labor standards at the local level, published by University of California Press and edited by Michael Reich, Ken Jacobs and Miranda Dietz.

A more recent example is the City of San Jose, which passed Proposition D in 2010. Before the passage of this increase of the minimum wage there were many predictions that businesses would leave the city, and that unemployment would increase. A year later, the Mercury News reported that “A year later, it is clear that raising San Jose's minimum wage has been an incredible success. The data shows that under San Jose's minimum wage, unemployment was reduced, the number of businesses grew, the number of minimum wage jobs expanded, average employee hours remained constant and the economy was stimulated.”  http://www.mercurynews.com/opinion/ci_25315215/san-jose-minimum-wage-year-old-success-story

So the tug of war has started in the City of San Diego, with the initial hearings from liberal leaders in the City Government, asking for a measure to be put on the ballot, while conservatives seek to block the plan.

Business leaders are already starting to sound the alarm on this. The San Jose example was also used as a model of what could go wrong by Councilman Kersey, who said, “I am not worried about the McDonalds of the world, they are going to be okay. What I am concerned about is the small Mom and Pop businesses who already have to absorb the statewide wage hike.”  What concerns Kersey is that the numbers being floated will be anywhere from 30 to 50 percent to fifty percent of their labor cost—a hefty increase for struggling small businesses to absorb.

To maintain competitiveness, according to Kersey, minimum wage should be set by the state.  He also told the committee and the public that according to the Employment Policy Institute (which is a business friendly PR firm, owned by Berman and Co., a DC PR firm working with the restaurant industry) claimed that the raise in San Jose led to layoffs and rising prices at some restaurants.

The study cited by Kersey has been criticized as flawed, based on a very small sample of employers in San Jose. It also contradicts studies done in large cities, including San Jose, that have found that the minimum wage has a net benefit. In fact, the article referred by Kersey from the Wall Street Journal, debating the Congressional Budget Office analysis of a raise in the federal minimum wage, also concluded that there would be a net benefit to the national economy. 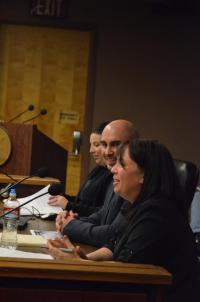 As Councilmember Marti Emerald pointed out, “This is a national trend.” A representative of the Mayor’s office said that this should be a federal policy, not a city policy.  But Congress, split by a partisan divide, has not taken action.

The hearing room was full. There is no doubt that this issue cuts deeply to San Diegans who are having trouble making ends meet, as well as to small businesses concerned about rising costs of doing business.

“38% do not make enough,” reads a recent headline from Frontera San Diego, a Spanish newspaper. The story cited a study released by the Center for Policy Initiatives. Which found that high numbers of San Diegans do not earn enough to support their families.  At the hearing, numerous individuals rose to voice similar concerns.

Josefina Garcia, a community leader, told the committee that she knows many families “who struggle economically.” This would lead to the increase “in the quality of life for many San Diegans.”

Ian Hughes, a local restaurant worker, told the Committee that “I cannot afford to get sick. I make enough to make rent. A day will put my rent at risk, a week definitively.”

Pamela Said, who works with immigrants, told the Committee of a program to help refugees become self-sufficient. It is supposed to last anywhere from 60 to 180 days. But few of her clients are able to make it and leave the program. Only nine of her clients have reached self-sufficiency.

Bill Freeman, President of the San Diego Education Association, told the committee that he has had to have parent teacher meetings after 9 p.m., because parents are working two jobs. He also spoke of children who are left home alone at ages as young as eight, because parents can’t afford childcare.

Jeff Olsen spoke directly to Kersey, speaking about how he might have to make a decision. Since he always speaks about keeping people out of welfare, this is one way.

There were those who were opposed as well.

Alisa Reinhart  from the San Diego Regional Chamber of Commerce said, “We ask for an independent study. We do not want to put our city at a competitive disadvantage.”

A representative from the San Diego Neighborhood Market Association said that while the organization has supported other measures to help workers, the NMA believes this one goes too far.

“We supported Obamacare because it took into account small businesses. We support Lorena Gonzales’s plan  because it supports small businesses,” the spokesman said of  a bill to mandate three sick days for workers that Gonzales introduced in the state Legislature.  But he said of the local measure proposed, “This plan risks their ability to remain competitive.” He also warned that some markets might move, or just close.

Namara Mercer of the San Diego Hotel and Motel Association told the committee that since there were no concrete numbers on the table, they were not ready to take a stand. But she also said that “further fiscal analysis” is needed.

After the meeting, East County Magazine talked with Council President Todd Gloria.  We asked about the resistance from the business  community to placing this on the ballot.

Gloria said that while there is the impression that this can hurt business, “We have plenty of studies that show that this is simply not the case.”

He emphasized that where the minimum wage has been raised, “Not only are thousands of families lifted out of poverty, but they actually end up spending more of their money in the economy.”  That could help businesses, large and small, advocates of the measure maintain.