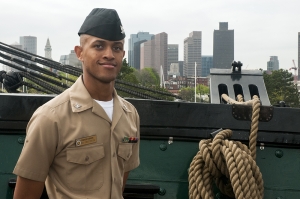 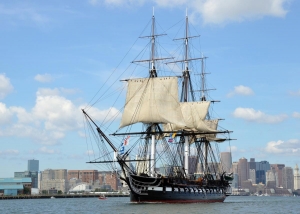 Petty Officer 3rd Class Dominique Robinson, an engineman, serves aboard the 216-year-old Boston-based ship named by President George Washington to honor the Constitution of the United States of America. Famously known as "Old Ironsides," the Constitution is a wooden-hulled three-masted heavy frigate that originally launched in 1797 as one of six original frigates authorized for construction by the Naval Armament Act of 1794.

Robinson, 20, said he is honored to have been selected to serve on the ship that is rich in history and successfully held off the British Navy in the War of 1812.

"I relish the opportunity to help preserve and help build upon the heritage of this great warship," said Robinson. "When you are at boot camp you get a quick brush of naval history, but being stationed here ignites a deeper sense of naval history."

Constitution actively defended sea lanes against global threats from 1797 to 1855. Now a featured destination on Boston's Freedom Trail, Constitution and her crew offer community outreach and education about the ship's history and the importance of maintaining a strong Navy to hundreds of thousands of visitors each year.

Seventy-five sailors make up the crew aboard USS Constitution. These sailors routinely interact with the public talking about their jobs aboard Constitution, their previous duty stations, Navy rules and regulations and life aboard a Navy vessel.

"It is an honor to serve on the USS Constitution, the world's oldest commissioned war fighting vessel, but I am even prouder to serve alongside its 75 member crew," said Cmdr. Sean Kearns, Constitution's 73rd commanding officer. "Each sailor selected to serve on the USS Constitution has a unique story to tell, like that of "Old Ironsides." The mission of today's Navy is not much different than in 1797: protecting and defending America on the world's oceans."

Constitution is scheduled to conduct several sailing demonstrations in Boston Harbor this summer prior to entering a three-year dry dock maintenance period. The ship's first sailing, which will commemorate both

the Battle of Midway and the 70th anniversary of D-Day, is scheduled for June 6. The popular Independence Day sailing, open to the public via lottery, will occur on July 4.

"The Navy was a perfect fit for me because I knew I needed to continue my education, and with the costs of college the Navy seemed an obvious choice," said Robinson. "I can get my education paid for while serving on the oldest war ship afloat."

USS Constitution, the world's oldest commissioned warship afloat, actively defended sea lanes against global threats from 1797 to 1855. Now a featured destination on Boston's Freedom Trail, Constitution and her crew of U.S. Navy Sailors offer community outreach and education about the ship's history and the importance of naval seapower to more than 500,000 visitors each year.

For more news and information on USS Constitution, visit: