May 21, 2012 (San Diego) – A decision on two controversial wind issues have been postponed by San Diego County’s Planning Commission.

A proposed wind ordinance as well as changes to the Boulevard community plan have been delayed until July 20.  In addition, planners heard public comments on the Tule Wind project proposed for McCain Valley, but postponed a decision until June 8, due to the absence of two planners.

Multiple parties including Californians Aware and East County Magazine had asked that public testimony and hearings on both items be postponed due to problems accessing agendas and attachments in the commission’s newly redesigned website.  ECM was unable to access key information prior to the hearing in order to adequately notify readers.  The Ralph M. Brown act requires all public agencies in California to provide 72 hours notification to media and the public.

Tule Wind would power a projected 60,000 homes and provide325 construction jobs as well as 10-12 permanent jobs, the developer estimates.

The federal Bureau of Land Management has already approved 62 wind turbines on federal land in McCCain Valley. However the full project proposed by Iberdrola Renewables also includes 18 turbines on tribal land, 7 on state property and 5 on private parcels under County jurisdiction.  County approval is also needed for a batch plant, collector substation and transmission lines.

Staff recommended a denial of turbines for Tule Wind on lands under County control, as well as undergrounding of power lines needed to transmit power from the full project.

Harley Davidson with Iberdrola argued that overhead transmission lines would be “less environmentally damaging” and said the patina would weather to “look like wood, not steel.”  She said the company is hoping to collocate lines for some other renewable projects proposed and further, that trenching required for undergrounding would be damaging to cultural resource sites on the property.

Iberdrola claims to have over a thousand supporters for the project, “mostly in East County.”  But Commissioner Peder Norby questioned those assertions. “I looked at your letters and it didn’t look to me like many were in East County,” he stated.

SOITEC, which plans a solar project in the same vicinity, also testified on behalf of overhead lines noting that with Powerlink recently built, “viewsheds are already ruined” by 120 foot high towers.

The turbines would measure 492 feet in height—or roughly four times the height of the Powerlink high voltage towers.

Other supporters argued the project would help reduce greenhouse gas emissions and bring business to the economically depressed Boulevard area.  One resident said she lost family members to black lung in coal-mining areas and to her, “Wind energy is not the future, it’s now.”

Donna Tisdale, Boulevard Planning Group chair and representative of two nonprofits opposing the project, said the site was “downgraded unlawfully by the BLM with pressure from Dick Cheney.”  Iberdrola has received over a billion dollars in federal subsidies thus far for projects across the U.S. but recently dropped two wind projects in Oregon as Congress has refused to renew wind subsidies, which expire at year’s end. Thus the clock is ticking for Iberdrola to build its project, or risk losing federal money.

She contended that setbacks are too close to homes given the terrain and that low-frequency noise, vibrations, and stray voltage could threaten health of area residents.

Tisdale also revealed that two wind studies touted by Iberdrola in Massachusetts and Ontario, Canada both relied on literature reviews and that health officials “did not interview neighbors who were ill” and that in Massachusetts, those individuals had asked that a health study be done.  Since then, Massachusetts shut down a turbine due to the health concerns, she added.  She displayed a list of quotes from neighbors of Iberdrola’s wind project in Hardscrabble, Massachusetts, who describe nonstop “grinding and grinding, whooshing and whooshing,” sounds.

Tisdale also cited evidence that an appraiser has found negative impacts on property values up to three miles away from turbine projects. In addition, she cited concern for bighorn sheep and birds in the project area.

Manzanita Indians’ tribal consultant Jeff Riolo testified that while the reservation has over 50 percent unemployment and favors renewable energy in general, “This is not an appropriate location.”

The tribe opposes the project due to its impacts on golden eagles and traditional cultural property as well as negative health impacts.   Manzanita tribal members believe they are suffering ill health impacts caused by a neighboring wind energy facility on the Campo reservation.  “My people will be surrounded by turbines,” he said of Tule Wind.  “We have entered into a health assessment study.” He asked planners to deny the application or at least delay a decision until the health study results are available.

Other Native American speakers echoed concerns over eagles and cultural resources, noting that the likelihood of human remains and artifacts being found are high on a site denoted by landmarks such as Lost Valley Rock, a sacred symbol used for navigation by nomadic tribes for centuries.

Manzanita tribal council chairman John Elilott stated, “Nobody has been able to answer the question – what are the cumulative effects?  I have a responsibility to generations to come.” He noted that no turbine projects are proposed in wealthier areas of San Diego.  “Put solar panels on your own homes so that we can keep our lands as they have been for thousands of years.”  He warned that “trenching machines will totally decimate our cultural sites. They will shred everything.” 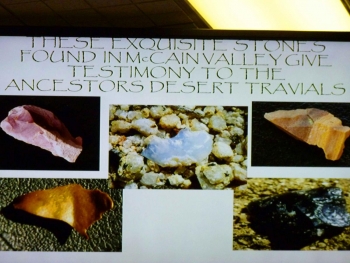 A Native American monitor from Mount Laguna showed examples of “exquisite” ancient stone artifacts and tools found in McCain Valley as representative of what will be lost if the project is built.

ECM editor Miriam Raftery presented testimony that the Bureau of Land Management has ignored requirements during construction now underway at the Ocotillo Express wind project, where no monitors have been on hand. ECM photographers have documented destruction of protected burrowing owl sites, scraping bare of vast tracts of desert and excessive dust with no BLM monitors to be found.  Thus there is no reason to believe the BLM will honor commitments to protect the public, wildlife, or the environment in McCain Valley, she observed.

Craig Maxwell of La Mesa, who enjoys hiking in the McCain Valley area,  urged planners to oppose any changes to current height limitations. He pointed  out that earlier in Friday’s meeting, plannerss voted down a proposed 50-foot-tall cell phone tower in Jamacha that would have been disguised as a cypress tre, because it was too tall and would negatively impact character of the community.

Maxwell noted that he couldn’t think of an object  in nature big enough to hide the 492-foot-turbines with massive blades proposed for McCain Valley.  In a voice tinged with irony, he suggested,  “Perhaps you could disguise them all as giant sequoia trees.”

For the people in San Diego and Southern California I have some new facts for you. These are facts concerning the reported number of dead eagles at wind farms. In my expert opinion, these numbers reek with fraud. It is well known that at Altamont pass 60-90 golden eagles are smashed out of the sky by turbine blades each year. This a figure that is only known to the world today because of the hard work of Shawn Smallwood and pressure from concerned San Francisco Bay Area residents. No other wind farm in America has gotten the same scrutiny as Altamont Pass. Yet for the entire Western US the wind industry is only claiming a total of 57 more eagle deaths (including 3 bald eagles). Altamont pass with 580 MW has approximately 18 million square feet of spinning turbine blades. The remaining wind farms in the West have 1.2 billion more square feet of spinning turbine blades(rotor sweep). We are talking about 56 times more total rotor sweep or the equivalent of 56 more Altamont Pass wind farms. Many of these wind farms are in prime golden eagle habitat including vital habitat for the migratory northern populations of golden eagles. So we have 60-90 eagle deaths at Altamont each year and only 57 other dead eagles reported by the industry. The new bigger turbine kill more eagles per MW. This was proven at Altamont and most of these other wind farms have the new larger turbines. From what I know of the Western US and the locations of these wind farms, I would say a much more accurate figure for golden eagle mortality at wind farms in the Western US is 500 golden eagles per year. Keep in mind thanks to the USFWS, guidelines for this industry are Voluntary. In other words there are none.

Oh, and one more thing, Miriam: Do you have any updates on the judge's Ocotillo decision?

Thank you for all of your hard (and very fine) work, Miriam. Eastcountymagazine desrves no small measure of credit for this victory.

I hope that what happened in Ocotillo will not happen here, and that there is yet time to save McCain Valley and other wild and scenic areas.