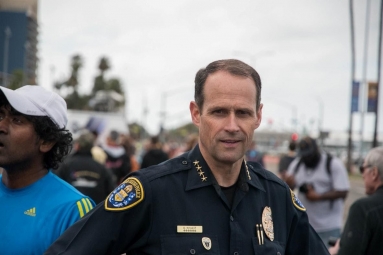 The protests came in response to the death of George Floyd, shown on video being killed by a Minnesota police officer who kept a knee on Floyd’s neck for over eight minutes. The officer has been fired and now faces a murder charge.  However, Minneapolis police have caused people to become unconscious 44 times since 2015 with neck restraints, NBC has reported.

SDPD has faced complaints in the past over its use of chokehold tactics.

But ECM news partner 10 News reporters that Sheriff Bill Gore told the station his department will continue to allow the carotid restraint.

The hold is not what caused the death. The extended amount of time that the guy was on his stomach with his hands handcuffed behind his back and pressure on his back is what caused the main issue. The added pressure on the neck just made the entire thing worse. You can 100% choke someone out by laying them on their stomach with their hands extended behind their back and pressure on them. It prevents your lungs from expanding like they need to get air. Add the fact that the carotid chokehold was used in addition over a long duration is what caused the death. The issue with the carotid chokehold in this case is the fact the cop stood on him for 8 freaking minutes, not the actual restraint.