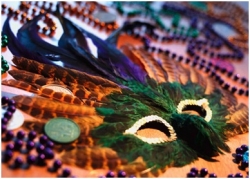 According to police, Arevelos stopped a female motorist, 32, as she was driving out of downtown after Tuesday night’s Mardi Gras revelry. She was suspected of driving under the influence of alcohol and the officer is accused of sexually battering the woman during the traffic stop.

Officer Arevelos, an 18-year veteran of the police force assigned to the Traffic Division when the attack occurred, has been arrested and booked into county jail, police revealed this evening. His peace officer powers were revoked and he was suspended from duty without pay while the investigation continues.

Arevelos is the second San Diego police officer to face investigation for alleged sexual assault in the past month.

In early March, SDPD vice detective Art Perea, a resident of Alpine, resigned from the force “for personal reasons,” according to Chief Lansdowne. Perea was facing an internal investigation related to accusations that he and a woman accomplice raped a female Point Loma Nazarene student in El Cajon.

El Cajon police have said they are awaiting forensic evidence test results before determining whether to forward the case to the San Diego County District Attorney. Perea’s wife of 10 months has since filed for divorce.