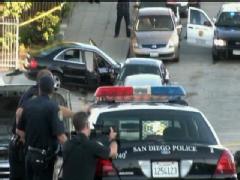 Update:  SDPD Officer Jeremy Henwood, 36, died early this morning, Chief William Landsdowne has announced.  A captain in the Marine Corps Reserves, he had recently returned from Afghanistan.  The killer, who left behind a suicide note, has been identified as Dejon Marquee White, 23. Full details here:  http://www.sdcitynews.com/city-heights-officer-fatally-shot-in-unprovoked-attack/

August 7, 2011 (San Diego) – A man seated in his car outside the In 'N' Out restaurant at 1541 N. Magnolia Avenue in the unincorporated area of El Cajon was shot in the face by an assailant with a shotgun last night at 5:22 p.m. The El Cajon victim, Martin Hanna, is expected to recover, according to the Sheriff.  However a San Diego Police officer who was later shot in the head by the suspect is in critical condition in the hospital. The suspect was shot and killed by police.

After the El Cajon shooting, the suspect fled in a black Audi with paper dealer plates. A few minutes later, an El Cajon police officer who had no information about the shooting saw a black Audi speeding west on I-8 in El Cajon. He attempted to stop the vehicle for a traffic violation, but the pursuit was terminated for public safety reasons when the driver exceeded 100 miles per hour. The suspect vehicle was last seen heading southbound on I-15.

Within minutes, a possible link between the vehicle and the El Cajon shooting was made and an “All units” broadcast was made to county law enforcement agencies at 5:29 p.m., seven minutes after the attack. Three minutes later, at 5:29 p.m., a female civilian used a police radio to advise that a San Diego Police officer had been shot at University Avenue and 45th Street.

Civilians rendered first aid to the officer until police arrived at the scene. Paramedics then arrived and transported the injured officer to a local hospital, where he is in extremely critical condition, San Diego Police report this morning. His identity is being withheld pending notification of family.

At 6 p.m., SDPD communications received a call that a black Audi was parked in front of an apartment building in the 4000 block of 48th Street. The SDPD air support unit, ABLE, spotted the suspect as he left the apartment and got in the Audi, carrying a shotgun. ABLE directed units into the area as the suspect drove south on 48th. Several SDPD units drove toward the suspect vehicle, blocking the street, and attempted to arrest the suspect.

The suspect grabbed the shotgun and several officers fired their weapons at him. The suspect’s vehicle rolled backwards, down the street and crashed into a wrought iron fence. Officers pulled the suspect from the vehicle and called for paramedics, but the suspect was pronounced dead at the scene at 6:23 p.m.

A SWAT team was called in to secure the apartment to make sure that there was no second suspect. Around 10 p.m. they entered and searched the unit, finding no one inside.

The suspect has been identified, but his name has not yet been released by police pending notification of family.