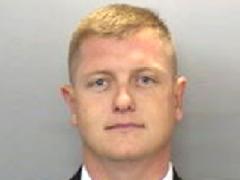 “We are saddened by this senseless and cowardly act that has taken away a true hero,” said Brian R. Marvel, president of the San Diego Police Officers Association.

He added, “Having recently returned from deployment in Afghanistan, Officer Henwood was continuing to serve the community just as he had served his country – with honor and respect. He will be remembered for these qualities. As we all join together to mourn our fallen brother, our thoughts and prayers are with his family and friends.”

Officer Jeremy Henwood was shot in his patrol car by a suspect who had already shot a civilian victim earlier in the day outside an In 'N' Out Burger in El Cajon. Officer Henwood was on patrol duty when the suspect pulled up next to him, fired a shotgun at him and drove off. A witness called for help from Officer Henwood’s radio. Responding emergency services transported Officer Henwood to a local hospital, where he later passed away. Officer Henwood had been with the San Diego Police Department for four years. He is survived by his parents.

Funeral service arrangements are pending. The San Diego Police Officers Association has established a trust fund for Officer Henwood’s family. Donations can be mailed to:

Checks can be made payable to the San Diego Police Officers Association (SDPOA). Please write “Officer Jeremy Henwood” in the memo line. Any donations (100%) will go directly to the family. The SDPOA is also accepting online donations through the following link: http://www.sdpoa.org/sdpoa-contactus.aspx