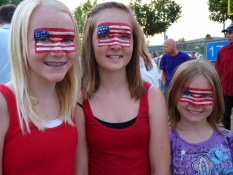 July 2, 2014 (San Diego)--MyLife, a social media website, recently did an analysis of data to determine the most patriotic cities in the U.S. The results are in -- just in time for the 4th of July -- and San Diego is ranked number one.

The cities that ranked very well in total spending on veterans (San Diego was fifth in this category) were important in determining which cities made the top 10 rankings. The top cities were fairly spread out, geographically. Its interesting to see that some states had multiple cities earning top rankings for this analysis: Texas had five cities and California had two.

You can read the full analysis here or at  http://www.mylife.com/blog/the-10-most-patriotic-cities/

MyLife is a social media website that claims to connect people and helps you control your online information, including managing your e-mail and social accounts, and helping people reunite with long lost family and friends. MyLife has been featured by sites such as The Wall Street Journal, BCC, Yahoo!, and TechCrunch.

There have, however, been complaints against the company through the years and a settlement over misleading advertisements in Washington state.  Over 1,000 Better Business Bureau complaints have been settled as well.