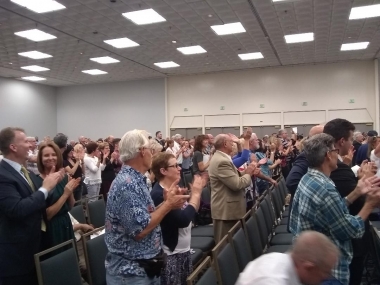 Sure, there was the expected political hype with the usual talking points and clichés. (Party Chairman Tony Krvaric’s comment that political races with two Democratic candidates and no Republicans are choices between “death by hanging or firing squad” was responded to with laughter.)

But there was also something unique and real in the air, a convergence of unexpected local and international events that participants believe gives momentum to a red tide rising in a blue state.

Republican candidate for governor John Cox performed far better in the June 5 primary election than people expected. A poll published by the L.A. Times on May 22 had Gavin Newsom (21%) with 2.1 times as much support as John Cox (10%) and Antonio Villaraigosa (11%) having slightly more support than Cox. On June 5, voters gave Newsom (34%) only 1.3 times as many votes as Cox (26%) and Cox had twice as many votes as Villaraigosa (13%.) 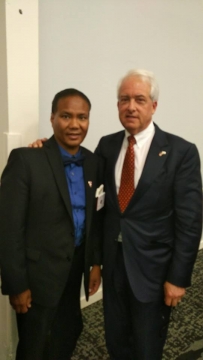 Cox, a resident of Rancho Santa Fe, said to the audience, “California, with its Hollywood elite and its Bay area elites, is the tip of the spear. They call themselves the resistance. But guess what? I am going to lead the resistance to the resistance in California,” he pledged.

The gubernatorial candidate continued, “A lot of so-called blue states elect businessmen as governors because they address quality of life. California spends four times what Texas does to build a mile of road. That kind of waste comes to an end. We are going to build 3 million homes in the next 10 years at lower costs,” he stated, but did not provide details on how he would make this happen. “We have plenty of water. if the politicians in Sacramento would build reservoirs. We’re going to build reservoirs and get desalination plants built efficiently.

For decades, California has had more people move out to other states than move in from other states. In November 2017 The Orange County Register reported, “California’s net outmigration [of U.S. residents] has been ongoing for two decades plus."

Former Rancho Cucamonga resident Paul Chabot called it quits after the November 2016 election. “I was tired of the radical leftward shift Democrats have taken the state and the cowardly Republican leaders who refused to defend families. I decided to move my family from California to Texas where we have a fighting chance. The schools are top-rated, the communities are virtually crime-free and the economy provides the opportunity for families to survive on the income of one parent.”

Chabot started his company, Conservative Move, to help other families with the same concerns as him make the same decision.

But there is cause for hope for conservatives who have come to see California as a lost cause. The strong showing for Cox in the primary election follows significant statewide momentum for opposition to Democratic supermajority taxation.

Radio host Carl DeMaio touted the success of recalling Democratic state senator Josh Newman of Orange County (60% to 40%) and in gathering nearly a million signatures for the gas tax repeal initiative. “Democracy delayed is not democracy denied,” he said referring to Democratic efforts to obstruct the initiative.

“San Diego County submitted 203,000 signatures. San Diego overperformed the nearest county by a factor of five. The San Diego County Republican Party was ground zero statewide,” DeMaio told the audience. “You are the resistance. The grassroots have been awakened and we are fighting back.”

He contends that California Democrats are “drunk on power with their supermajority. The best way for us to respond to the gas tax is to take the weapon out of their hands. We have to end the Democrat supermajority.”

Halfway through the meeting, Chairman Krvaric announced that he received news from President Trump's summit with Kim Jong Un that North Korea was pledging to fully denuclearize. The room lit up with a roar of cheers and applause.

Nearly all San Diego Republican candidates had time to speak. The audience cheered comments from speakers about life, liberty and limited government. The reaction was even stronger any time an anti-union or anti-tax comment was made, especially from the those in the front.

Congressman Duncan Hunter, who had a strong showing in the primary election despite being under a federal criminal investigation and grand jury probe for alleged campaign finance violations, none-the-less stated, “It’s a great year. I had about ten donors send me letters saying, ‘When we start building the border wall I’ll send you a hundred dollars.’ Guess what I just did? I wrote them back and said, ‘Send your hundred dollars.’ Trump is doing what he said he would do.”

Hunter said Republicans need to stop fighting other Republicans, adding, “It’s time to get together and be generous and beat the Democrats.”

District Attorney Summer Stephan said, “We did something that hasn’t been done around the country. We beat back [George Soros.]” The wealthy liberal donor spent large sums backing Genevieve Jones-Wright, Stephan’s Democratic rival.  “One thing we did here that worked very well is we didn’t compromise. A lot of people when they saw George Soros come in they would compromise. They would try to change their positions and that doesn’t work. You don’t compromise.” She continued, “I’m going to fight tirelessly for justice in this county. I’m going to make sure we keep our kids and our seniors safe.”

District 4 County Supervisorial candidate Bonnie Dumanis said, “We’re in for a dog fight. My opponent will say anything to get elected. He gave a five-minute speech about what a good Republican he is. Well he went from Republican to Independent to Democrat. They spent $1.2 million. I’m going to need each and every one of you to fight like we never fought before.” She added in her Boston accent, “Don’t worry I’m up for it. I’m from Brockton, Massachusetts, home of Rocky Marciano and Marvin Hagler. So I know how to fight.”

The San Diego County Democratic Party has not notified our media outlet of a similar post-election event showcasing its candidates. If a comparable event is announced, ECM hopes to cover it as part of our commitment to reflecting all voices and views in our region.