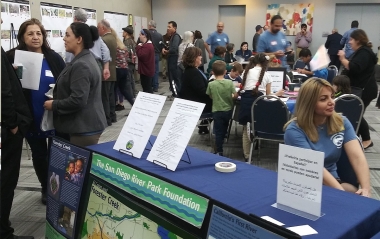 You can provide your input on the Foundation’s survey on El Cajon Recreational Access Plan at www.sandiegoriver.org/survey.html (available in English, Spanish and Arabic)

“We want to make sure the planning process is accessible and that everyone's voice is heard. The ultimate goal is a park plan that reflects everyone in the community,” said Sarah Hutmacher, Senior Associate Director for the San Diego River Park Foundation, which protects and enhances the San Diego River and has a mission that includes creation of a river-long park system. 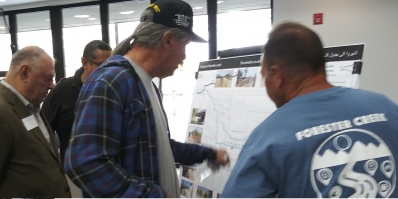 Photo, right: (Station #2) John Allen and Hector Valtierra help people orient themselves to the map and place a red sticky dot on their house, before continuing to detailed maps of the project 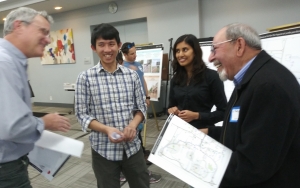 “I've been doing this around the State, and this is a phenomenal level of interest compared to many other open houses I've seen in other communities, and level of representation,” said Cancian. “I met a third generation El Cajon resident, and others who moved here within the last five years from other parts of the globe.”

“We had four meetings to determine where we should plan bike trails and parks,” says Chen. “Through the process we proposed a draft plan and our goal is to get feedback so we can make that plan better.”

The San Diego River Park Foundation hired Cal Poly graduate students to map potential green spaces in El Cajon. In April, their presentation will be given to the stakeholders, El Cajon City Staff and Council, and potentially members of the community. After that group's feedback, another version will be made public this summer.

“We students have spent a lot of time creating the plan and we want to present it and get feedback,” Chen said of the open house. 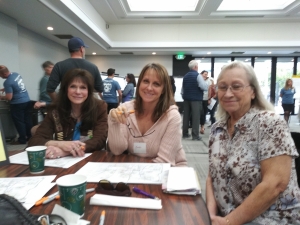 (Photo, right, L-R): Kate Elliott-Berneathy, Karen Richards, and Tish Snowball came to voice opposition to "improvements" at Wells Park that would reduce the size of the dog run.

"There are so many people that don't have space to run their dogs, so we all take our dogs there,” one of the residents said. “There are a lot of mobile homes and apartments here where people can't run their dogs. It's the best dog park in the region.”

Three residents named off dog parks locally, adding that they think Wells Park is best because it's so big. They don't want part of the dog-run at Wells Park sacrificed for a supposed “greater good,” but don't mind the bathrooms being fixed and an extra set built for dog runners. 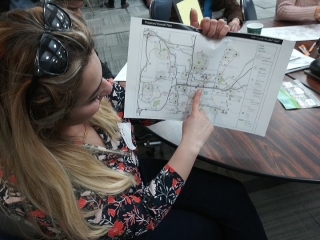 (Photo, left):   Doaa Polus, seen pointing to her map, votes for 3 new parks just north of I-8 in the vicinity of First Street.

Marina Varano gave out red stickers to pick participants' favorite river from a selection of some of the finest in the world. When we visited earlier in the night (final results may differ), Carroll Creek in Maryland was in first place, the Tigris River in Iraq second, and Minnehaha Creek in St. Louis Park, Minnesota and Marsh Creek in Oakley, California were tied for third place.

Carroll Creek and the Tigris have traditional promenades along them while Minnehaha Creek has a wooden walkway along it and Marsh Creek looks like some of the wetter unimproved marshier portions of the San Diego River in Mission Valley.

Please be sure to take the survey at www.sandiegoriver.org/survey.html and view a map here. 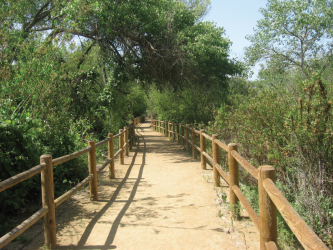