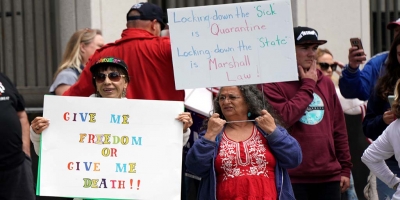 April 20, 2020 (San Diego) – Over the weekend, hundreds of people held protests locally to call for reopening of parks, beaches and businesses shut down due to county and state health orders to prevent spread of COVID-19.   The protesters gathered in defiance of a county ban on all gatherings and failed even to provide social distancing or wear mask, putting themselves and anyone they come in contact with at risk of catching the highly contagious virus.

Today, the San Diego Sheriff and San Diego Police Department issued a statement which warns, “Although the protests were allowed to take place, we must not forget the public health orders were put in place to protect our communities from the spread of COVID-19. While no citations were issued at the protests, that does not mean prosecution will not be sought, especially to the organizers of these events.”

Violations of county health orders are punishable with fines of $1,000 and up to six months in jail.

The announcement from the Sheriff and SDPD came after Rev. Shane Harris, leader of the Peope’s Alliance for Justice, criticized SDPD for not arresting protesters. While recognizing free speech rights, Harris suggested that the nearly all-white crowd received preferential treatment.

“If black folks were [demonstrating] in downtown San Diego, don’t you think the police presence would be different?” he asked. “What we saw was racial entitlement at its finest.” He criticized rally organizers for letting protesters pack together like “sardines at a party” and called on county Supervisors Nathan Fletcher and Greg Cox of the COVID-19 response committee to issue new directives allowing public protests only if face masks are worn and participants stayed 6 feet apart.

Disparity in enforcement was also evident when contrasted against immigration advocates who were cited and arrested last week for holding protests outside the Otay Mesa immigrant detention facility. Those protesters maintained social distancing inside their vehicles, honking horns to protest spread of COVID-19 in the facility and urging release of vulnerable detainees to save lives.

The so-called "freedom rallies", encouraged by President Donald Trump, have been held across the nation but have also drawn pushbacks on social media from opponents calling protesters "selfish" for putting self-interests over saving lives of others, including healthcare workers. In Colorado, nurses in scrubs and masks took to the streets to stand in front of protesters' vehicles, reminding demonstrators that their actions increase dangers to healthcare workers who are risking their lives to treat COVID-19 patients.

Some protesters' signs showed concern over jobs or school closures. Others complained of lesser issue such as inaiblity to get maincures or hold parties.  One local protester carried a sign which read, "Give me freedom or give me death."

Death isn't the only risk from COVID-19, which can take months to recover from, with many suffering permanent impairment.  In San Diego, the death rate among known COVID-19 cases is currently 3.5%, however nationally around a third of those who survive being on ventilators wind up with permanent damage that may include lungs, brain, and other organs.

Below is the full statement from the law enforcement agencies:

As the COVID-19 pandemic continues to affect our region and the nation, we are reminded of the delicate balance between the right to protest and enforcement of public safety laws. The San Diego Police Department and San Diego County Sheriff's Department both recognize these concerns. As we continue to deal with this crisis as a region, it is important to understand we are all in this together.

Over the weekend, protests were held across the county against Governor Newsom's Executive Order and the County's Public Health Order.

On Saturday, a large protest was held in Downtown San Diego in front of Superior Court. Several hundred protestors gathered to voice their frustration, anger and disagreement with the governmental orders. On Sunday, a protest was held in Encinitas protesting the closure of beaches and public spaces.

The San Diego Police Department and San Diego County Sheriff's Department recognize this fundamental right while balancing it with the need to enforce the public health orders. Both on Saturday and Sunday, the protests remained peaceful and once people’s voices were heard, the protests ended.

Throughout these challenging times, law enforcement’s role has been to maintain public safety by ensuring community members are in compliance of the state and county regulations to prevent the spread of COVID-19. Numerous warnings have been given along with citations to those who violated these orders.

Although the protests were allowed to take place, we must not forget the public health orders were put in place to protect our communities from the spread of COVID-19.

While no citations were issued at the protests, that does not mean prosecution will not be sought, especially to the organizers of these events.

Although these orders have caused great strain to all of us, they are in place to save lives. The San Diego Police Department and San Diego County Sheriff's Department will continue to enforce the health orders.

It is not surprising to see such a lack of knowledge regarding our constitution, including court precedents regarding the power of governments to act during epidemics. It goes along with a more general lack of civics education that seems to extend all the way up to the President of the United States. He and his followers are just embarrassingly ignorant. But it must be said that ignorance is not something to be ashamed of, but rather is something we should celebrate overcoming! Let's give these poorly informed people a chance to both learn about our country and our laws, such that they can no longer be manipulated by a con man. Dear fellow Americans, you country needs you. Get informed, look around, quit drinking your news and information from limited sources and please learn what a conspiracy theory is and how to identify misinformation. You can save the country you claim to love from yourself, if you only broaden your information sources and do your own critical thinking. You can do it if you try.