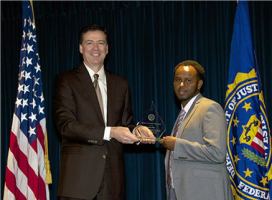 April 5, 2014 (San Diego)— In a ceremony at FBI Headquarters on April 4, 2014, Director James B. Comey recognized the recipients of the 2013 Director’s Community Leadership Award. These leaders, selected by their area FBI field office, have demonstrated outstanding contributions to their local communities through service.

Through the SDYA, Mr. Idlle regularly organizes sports teams for Somali youth and teaches participants to work as a team, be respectful of others, and to sort through problems in a non-violent manner. The organization’s goal is to provide an affordable venue that fosters interaction between adult mentors and neighborhood youth.

Mr. Idlle is also an active participant in the law enforcement/Somali roundtable, which works to advance cooperation and between law enforcement and the Somali community. The roundtable is a collaborative effort between the Somali community, the FBI San Diego Division, various local police departments, and the U.S. Attorney’s office. At a recent Somali Youth and Athletics Fair hosted by the FBI, Mr. Idlle independently organized a basketball tournament, advertised the event, organized competitive teams, and presented awards.

“The FBI and law enforcement agencies around the country diligently work for the good of the communities we serve and for the nation as a whole. But we can’t do it alone—we also need the support of the people who live in those communities,” said Special Agent Darrell Foxworth in San Diego.

“This year’s honorees have distinguished themselves in remarkable ways through their hard work, their leadership, and their strength of character,” said Director Comey. “They are ordinary citizens, but what they have accomplished is nothing short of extraordinary.”

The DCLA was created in 1990 and is awarded to community leaders in each of the FBI’s 56 field offices. The award recognizes those who have gone above and beyond the call of duty to keep America and its children safe. It is a way to honor individuals and organizations for their efforts in combating crime, terrorism, drugs, and violence in America.