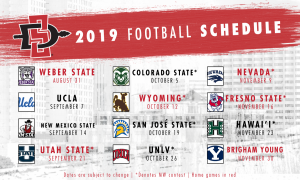 February 4, 2019 (San Diego) - The San Diego State football released its 2019 schedule on Monday. Game times and television arrangements, including moves to non-Saturdays will be announced at a later date.

The Aztecs open their 2019 slate at home on Aug. 31 against Weber State. It will be SDSU’s first meeting with the Wildcats since 1967 and third overall. WSU finished 10-3 last year, falling to No. 7 Maine in a FCS quarterfinal game.

San Diego State then makes the short drive to Pasadena to take on UCLA at Rose Bowl Stadium on Sept. 7. The Aztecs have won four of their last five games against Pac-12 opponents. SDSU has never beaten the Bruins, posting a 0-21-1 record in the series, including a 33-14 loss in the last meeting at UCLA in 2009. The Bruins are coming off a 3-9 season in 2018.

San Diego State continues its road trip on Sept. 14 with a game at New Mexico State. The Aztecs are 9-1-1 all-time against the Aggies and have won seven straight games in the series. In the last meeting in 2013 in Las Cruces, SDSU rallied from a 16-0 deficit to beat NMSU, 26-16, in Donnel Pumphrey’s first career 100-yard rushing game. New Mexico State was 3-9 a year ago.

San Diego State kicks off its Mountain West slate the following week (Sept. 21) against Utah State at SDCCU Stadium, the start of three straight games against teams from the Mountain Division of the league. The Aztecs have won 10 consecutive games in the series and are 12-1 overall against the Aggies. In the last meeting in 2016 in Logan, SDSU came away with a 40-13 victory. USU finished 11-2 in 2018, highlighted by a 52-13 win over North Texas in the Gildan New Mexico Bowl in Albuquerque. Utah State scored at least 50 points in seven games a year ago and finished the season ranked 22nd in the AP Top 25 poll and 21st in the Amway Coaches poll.

The Aztecs wrap up their Mountain Division portion of the schedule on Oct. 12 at home against Wyoming. SDSU beat the Cowboys, 27-24, in the last meeting at the 2016 Mountain West Championship game in Laramie. UW leads the all-time series, 19-18. Wyoming won its final four games of the season in 2018, but was left out of a bowl game, despite a 6-6 record.

San Diego State begins its West Division slate of the schedule with back-to-back road games, beginning Oct. 19 at San José State. The Aztecs held on to a 16-13 win over the Spartans last season at SDCCU Stadium and have won six consecutive games in the series. Overall, SDSU owns a slight 21-19-2 edge in the series. SJSU was 1-11 last year.

San Diego State next heads to Las Vegas, Nev., to play UNLV on Oct. 26. The Aztecs had their four-game winning streak in the series snapped at home last year in a 27-24 setback. Overall, SDSU is 18-10 all-time against the Rebels. UNLV finished 4-8 a year ago after winning two of its final three games of the season.

After its second open date of the season on Nov. 2, San Diego State ends its regular season with three of its final four games at home, first on Nov. 9 vs. Nevada. The Aztecs lost a close 28-24 game in Reno last October, snapping a three-game winning streak in the series. SDSU is 7-4 all-time against the Wolf Pack. Last year, Nevada won five of its final six games of the season to finish 8-5, including a 16-13 win over Arkansas State in the Nova Home Loans Arizona Bowl.

San Diego State stays home on Nov. 16 with a game against Fresno State, the defending Mountain West champion. The Aztecs have lost the past two games in the series with the Bulldogs, but lead the overall series, 29-25-4. FS won its final five games of the season, including a 31-20 win over Arizona State in the Las Vegas Bowl. Fresno State finished 12-2 on the season and 18th in both national polls.

San Diego State hits the road for the final time of the regular season on Nov. 23 at Hawai’i. The Aztecs will look to avenge a 31-30 overtime last year on Senior Night in San Diego, snapping SDSU’s six-game winning streak in the series. San Diego State is 21-10-2 all-time against the Rainbow Warriors. UH was 8-6 in 2018, falling to Louisiana Tech, 31-14, in the Hawai’i Bowl.

For the first time since 2011, the Aztecs end their season with a non-conference game, welcoming Brigham Young on Nov. 30. SDSU has lost six straight games in the series and is 7-28-1 all-time against the Cougars. In the last meeting in the 2012 Poinsettia Bowl, San Diego State dropped a 23-6 decision to BYU. Brigham Young was 7-6 last season, beating Western Michigan, 49-18 in the Famous Idaho Potato Bowl.

The Aztecs finished 2018 with a 7-6 record, including wins over No. 23/25 Arizona State and rv/No. 24 Boise State. SDSU is one of 14 teams to make a bowl game in nine consecutive seasons. San Diego State returns its leading passer (Ryan Agnew), rusher (Juwan Washington) and tackler (Kyahva Tezino) from a year ago.

San Diego State is accepting new account deposits on 2019 season tickets through the Aztec Ticket Office, while current season-ticket holders can also renew their tickets for the 2019 campaign. Fans can purchase tickets through GoAztecs.com, over the phone by calling (619) 283-7378, or by visiting SDCCU Stadium's Window E between 9 a.m. and 5 p.m.