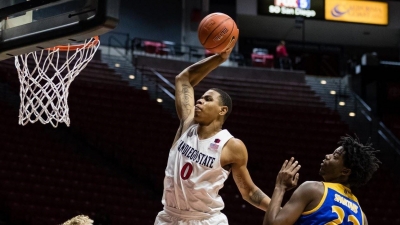 Six of 11 non-conference games will be played in Viejas Arena and five opponents played in the postseason last year.

The season opens on Tuesday, Nov. 9 against UC Riverside in Viejas Arena. These teams have met 11 times since the series commenced in the 1966-67 season, and the Aztecs have yet to drop a game to the Highlanders. In the four meetings in Viejas Arena, San Diego State’s average margin of victory has been 23.5 points. A year ago, UC Riverside went 14-8, 8-4 in the Big West and reached the semifinal game of its conference tournament.

San Diego State then returns home games against Arizona State and UT Arlington. The Sun Devils will be in Viejas Arena on Thursday, Nov. 18, followed by the Mavericks on Saturday, Nov. 20.

San Diego State and UT Arlington, a member of the Sun Belt Conference, have never played. Last season the Mavericks were 13-13 and as the No. 3 seed in its conference tournament lost its opening round game.

On Thursday and Friday, Nov. 25 and 26, the Aztecs compete in the Paycom Wooden Legacy in Anaheim, Calif. The event opens with a meeting against Georgetown at 8:30 p.m. PT on Thursday and the game broadcast on ESPN2. In its only previous meeting, at Georgetown in the 1981-82 season, the Hoyas came away with a 71-53 victory, and current Georgetown head coach Patrick Ewing was a freshman on that squad.

Depending on the outcome of the Georgetown game, the Aztecs will play either Southern California or Saint Joseph’s on Friday. The Trojans have defeated the Aztecs in ten of the 13 matchups, but in the last two meetings, in the 2010-11 and 2011-12 seasons, San Diego State was the victor. The Aztecs have never faced Saint Joseph’s. The Hawks went 5-15 last year, including 2-9 in Atlantic 10 Conference action and reached the second round of its conference tournament.

The team then heads to Ann Arbor, Mich., for head coach Brian Dutcher’s return to Michigan to lead the Aztecs against the team he helped guide to the 1989 NCAA Championship. The game, on Saturday, Dec. 4, will be the first meeting between the programs. Michigan, which finished 23-5 last season and reached the Elite Eight of the NCAA Tournament, was ranked in the top-4 in the nation for eight weeks last year.

Cal State Fullerton comes to Viejas Arena on Wednesday, Dec. 8 for its 32nd meeting with the Aztecs. San Diego State is 12-4 on its home floor against the Titans and has a 21-10 advantage in the all-time series. The last meeting, on Dec. 9, 2009, in Viejas, resulted in an 82-68 victory for SDSU.

Following an eight-day break for finals, the Aztecs return to action on Friday, Dec. 17 to play the Saint Mary’s College Gaels. The game will be played in the Footprint Center in Phoenix, Ariz., the home of the Phoenix Suns. The teams played last year in San Luis Obispo, Calif., where the Aztecs hammered the Gaels 74-49. Overall, San Diego State is 6-5 against the Gaels all-time, but 1-2 in meetings on a neutral court.

The non-conference slate is scheduled to wrap up in Viejas Arena. On Wednesday, Dec. 22, UC San Diego comes to The Mesa for the 12th meeting in the series, which SDSU leads 11-0. With UCSD in the midst of its transition to a Division I institution, this will be the first matchup between the Aztecs and Tritons as DI opponents. Last season, in its first as a member of the Big West the Tritons posted a 7-10 record, including a 4-8 mark in league games.

San Diego State has one more game which it can add to its schedule. That date and opponent will be announced in the future.

Home games in all CAPS