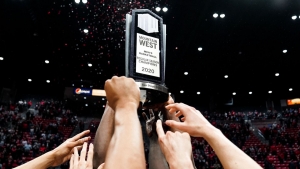 The Mountain West’s reworked 20-game schedule is revealed, as well as a neutral site game against Saint Mary’s

The Mountain West released its original conference schedule on Oct. 9. However, with increased concern about the coronavirus and its possible effect on the season, changes were made with the health and safety of student-athletes, coaches and staff in mind, while also significantly reducing travel.

The Mountain West has moved to a one-year, 20-game schedule under which teams will face each other in a two-game series in the same week, with a one-day break between contests. Each institution will have five home and five road series, reducing the regular travel schedule by four weeks, and helping to mitigate potential virus exposures.

After tipping off the season in Viejas Arena with a game against UCLA on Wednesday, Nov. 25 and then one against UC Irvine on Friday, Nov. 27, San Diego State jumps into conference play with its first two-game series.

The new Mountain West schedule is set to begin for the Aztecs with a pair of home contests against Colorado State on Thursday, Dec. 3 and Saturday, Dec. 5. San Diego State is 27-13 all-time at home against the Rams, which includes a 17-3 mark in Viejas Arena. After the CSU games, the team will return to non-conference action.

SDSU will be at Arizona State on Thursday, Dec. 10 and then back home for a matchup with BYU on Friday, Dec. 18.

San Diego State will then meet Saint Mary’s in a neutral site game at Cal Poly, in San Luis Obispo, Calif., on Tuesday, Dec. 22. The Gaels hold a 6-5 lead in the all-time series, which has not seen a game since 2010. In the previous two neutral site meetings, Saint Mary’s came away victorious on both occasions. In two games in the Wooden Classic, the Aztecs came out on the wrong end of 64-69 and 64-67 final scores in 2007 and 2008, respectively.

The team returns to league action at UNLV on Thursday, Dec. 31 and Saturday, Jan. 2. The Aztecs are 19-22 all-time against the Runnin’ Rebels in Las Vegas, but have an 18-16 mark in Thomas and Mack Arena.

Staying with Silver State theme, SDSU will host Nevada on Thursday, Jan. 7 and Saturday, Jan. 9. San Diego State is 7-1 against the Wolf Pack in Viejas, having won each of the last seven meetings on its home floor.

Following the Nevada games, the team faces back-to-back road series starting at Utah State. SDSU and the Aggies faceoff on Thursday, Jan. 14 and again on Saturday, Jan. 16. Since Utah State joined the conference, prior to the start of the 2013-14 season, San Diego State is 4-1 in the Dee Glen Smith Spectrum and have won its last four games in Logan, Utah.

The back half of the road trip finds SDSU at Air Force on Friday, Jan. 22 and Sunday, Jan. 24. San Diego State is 21-17 in Clune Arena, including an 89-74 victory in the team’s only regular season meeting last year.

Following the road trip, the Aztecs are back on The Mesa to host Wyoming, a program it is 15-5 against in Viejas Arena and overall is 28-11 against at home. Dating back to the 2007-08 season, SDSU has won 12 games in a row at home against the Cowboys. The matchups are scheduled for Thursday, Jan. 28 and Saturday, Jan. 30.

February opens with San Diego State in Albuquerque, N.M., to face the New Mexico Lobos. The Pit has always presented problems for SDSU, which is just 12-30 all-time in the facility. However, last season in Albuquerque the Aztecs handed New Mexico a 28-point drubbing, its largest margin of victory in its 42 games against the Lobos in the Pit. The 28-point win was the largest for a New Mexico opponent in the building since a 30-point loss to Utah on Jan. 21, 2002. The games are scheduled for Wednesday, Feb. 3 and Friday, Feb. 5.

Back home for its next two games, the Aztecs host San Jose State on Monday, Feb. 8 and Wednesday, Feb. 10. But for a last second three-pointer by Malachi Flynn, which allowed San Diego State to escape with a 59-57 win, the Spartans would have earned their first win in Viejas Arena in its program’s history, instead they are 0-8 on Steve Fisher Court.

The last regular-season road trip comes on Thursday, Feb. 18 and Saturday, Feb. 20 at Fresno State. San Diego State is 22-33 overall in Fresno, but have gone 6-4 in the Save Mart Center, including last season’s 64-55 victory, which snapped a two-game skid for the Aztecs in the central valley.

The regular season finale is against Boise State in Viejas. The matchup between the two teams picked to finish the year in first and second place by the media, is scheduled for Thursday, Feb. 25 and Saturday, Feb. 27. The Aztecs are 7-2 overall, including a 6-2 mark in Viejas, against Boise State and have come away victorious in each of its last three home matchups against the Broncos.

Following the Boise State series, the team will get a week and a half break before the 2021 Mountain West Men’s Basketball Championship begins in Las Vegas. The event is scheduled from Wednesday, March 10 through Saturday, March 13 in the Thomas and Mack Center.

San Diego State could add two additional non-conference matchups to reach the NCAA maximum of 27 regular-season games for 2020-21. Information regarding any additional games will be announced as they are scheduled.

Broadcast details, including game times and possible date changes, will be announced as they are determined.