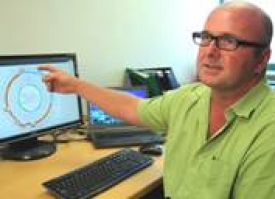 August 4, 2014 (San Diego)--Researchers at San Diego State University have discovered a new virus named crAssphage, which is living inside about half of the world’s population.

The virus infects one of the most common types of gut bacteria, called Bacteroidetes. This abundant virus could play a major role in obesity, diabetes and other diseases.

Robert Edwards, a bioinformatics professor at SDSU, and his colleagues stumbled upon the discovery by accident while using results of past studies to screen for new viruses.  Then they noticed a cluster of viral DNA that all of their samples had in common – and when they check it against a list of known viruses, they realized they’d discovered something never before documented.

Next they screened the samples using the National Institute of Health’s Human Microbiome Project and again, found it in abundance.

This was a new virus that about half of all people sampled had in their bodies—and nobody knew about it.

Researchers have found the virus in every population that they’ve examined – and believe that the virus may be as old as humans themselves.  The bacteria was not found, however, in fecal samples taken from very young children, suggesting that it is acquired during childhood.

Scientists named the virus crAssphage after the cross-assembly software used to discover it.

This virus is a bacteriophage, which infects and replicates inside bacteria—in this case, in the gut. Once the virus is isolated, scientists hope to examine its role in obesity.  Whether crAssphage promotes or suppresses obesity-related processes in the gut remains to be seen.

The virus might also be used to prevent or mitigate other diseases, such as diabetes.  Someday doctors could even utilize personalized medicine based on this virus.  How? By isolating your particular strain of the virus, manipulating it genetically to target harmful bacteria, and then giving it back to you.

This may explain why 1/2 the people in the world are clueless. Let's rename it the clueless virus.