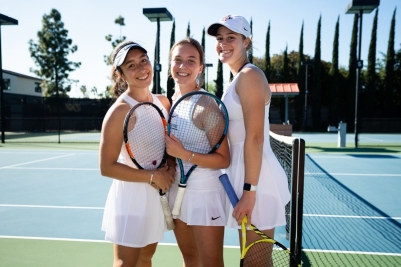 “I was really proud of the way that the team competed today against a very game opponent,” San Diego State head coach Perter Mattera said.  “Nnena Nadozie and Alicia Melosch at number two doubles were clutch in their hard-fought set which gave us the all-important doubles point and a little momentum going into the singles. We are looking forward to coming back tomorrow at home vs UC Riverside.”

The Aztecs opened the match by claiming the doubles point. Seniors Bunyawi Thasmchaiwat and Tamara Arnold earned the first victory, without allowing a game, with a 6-0 victory on court one. San Diego State claimed the point when Nadozie and Melosch grinded out a 7-5 victory at the No. 2 position.

San Diego State claimed five of the six singles matches with four of the five victories coming in straight sets. Thamchaiwat was first off the court, posting a 6-2, 6-0 victory over Tsveti Yotova at number one singles. The Aztecs senior is ranked 82nd nationally in singles and was one of four players to post wins in singles and doubles action Friday.

At No. 6 singles, SDSU’s Melosch surrendered only two total games in a 6-1, 6-1 win over Megan Tagaloa. Her victory gave the Aztecs a 3-0 advantage.

San Diego State clinched the team victory when Arnold posted a 6-2, 6-3 win over Maddy Ferreros on court two. Nadozie recorded a 6-2, 6-4 decision against Weronika Ejsmont at No. 3 singles.

The teams split a pair of highly competitive matches, with Sacramento State earning a team point when Paige Alter got past SDSU’s Paige Alter, 6-2, 7-6 (7). SDSU closed out its season-opening victory when Morin rallied from a one-set deficit to defat Best Lee, 3-6, 6-1, 6-3 at No. 4 singles.

San Diego State’s season-opening three game home stand continues tomorrow when the Aztecs play host to UC Riverside at the Aztec Tennis Center. Match time is set for noon PT and admission is free. The Highlanders are 0-1 on the season having lost a home match to Nevada last Saturday.