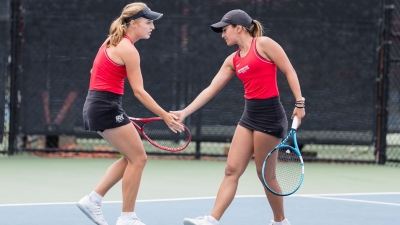 January 22, 2022 (San Diego) - The San Diego State women’s tennis team cruised to its second victory in as many days Saturday, defeating UC Riverside, 4-0, at the Aztec Tennis Center. The Aztecs are off to a 2-0 start this season, outscoring the opposition 10-1.

On Saturday, SDSU was able to show off its roster flexibility, posting a shutout victory with only two singles players slotted in the same position in the lineup as the day before. Sophomore Alexandria Von Tersch Pohrer saw her first action of the season, allowing Bunyawi Thamchaiwat, the 82nd-ranked singles player, to sit out today’s match.

“I am really proud of the team coming out today with great energy after a quick turnaround from yesterday's win,” San Diego State head coach Peter Mattera said. “We raised our level from our opener and played with really good focus and confidence.

“Our senior leaders, Nnena Nadozie and Tammy Arnold did an excellent job at the top of the lineup and set the standard for the rest of the team.”

San Diego State had to work for the double point. The Highlanders Niki Shahbazi and Sofia Lazzaroni struck first for the UC Riverside with a 6-1 victory on court three. The Aztecs rallied to take the doubles team point by winning the top two doubles matches. At number two doubles, SDSU’s Arnold and Julia Jordan teamed up for a 6-3 win and SDSU clinched the point when Nadozie and Alicia Melosch were victorious, 6-3.

The teams played to clinch in singles play, with the Aztecs closing the match out with three singles wins. First off was Arnold, who was victorious at No. 2 singles yesterday. Today, at the top of the lineup, the senior posted a 6-1, 6-2 victory over Mahli Silpachai to put the Aztecs up 2-0.

SDSU pushed the lead to 3-0 after a victory on court two. Nadozie was a straight-set winner over Hahn Pham, 6-2, 6-3. The senior was also victorious in singles on Friday, playing at the number three position against Sacramento State.

The Aztecs completed the shutout and clinched the team victory when Jordan closed out Serina Saltzen, 6-2, 6-3 at number five singles.

San Diego State’s concludes its three-game homestand on Saturday against Big West Conference member UC San Diego (1-2). The match is scheduled to being at noon PT at the Aztec Tennis Center.