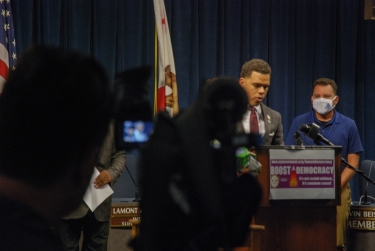 July 9, 2021 (San Diego) – San Diego Unified School District's board of trustees is poised to become the first public agency to adopt a “Boost Democracy” proposal by Rev. Shane Harris, President of the People’s Association of Justice Advocates. During its July 13 meeting, the board will test out allowing members of the public to receive a text message on request shortly before an agenda item they wish to speak on comes up. Harris hopes to have other government agencies across our region and nation follow suit.

Harris said that COVID-19 turned public meetings into a telecommunications platforms through online programs such as Zoom. “People engaged, people woke up, and people spoke up” about concerns ranging from COVID-19 to their children’s education.  “The central place that something going on was at these public meetings....One of the things I saw during this time was a breakdown in efficiency. It made government meetings more accessible,” since people could call in from where they were at, “but it did not make government meetings more efficient.” He said he saw mothers caring for children, activists and business owners calling in for meetings and waiting hours sometimes to speak on agenda items.

San Diego Unified School District Board of Education President Richard Barrera joined Shane Harris and the policy’s allies on July 8 to officially announce the district’s pilot of the “Boost Democracy” open government texting notifications program meeting, with a goal of making online and hybrid San Diego Unified school board meetings more accessible to the public throughout the pandemic and beyond.

Barrera noted that Zoom used during the pandemic has “made it possible for more people to participate,” which the district hopes to continue and expand. Waiting hours to speak can be “frustrating” and some can’t wait, meaning the board misses the opportunity to hear from them, he added.

Harris, the policy’s author, said people are in office “because they serve the constituents” and thanked district leaders for stepping up to respond to the concerns. “There are going to be controversial or challenging issues, and everyone deserves to be heard.” He likened the action to restaurants that regularly use text messaging to notify patrons when a table is available.

Activist Yusef Miller noted that the initiative will also allow children to watch and learn more easily, providing access to everyone, "no matter where you are from..."

Meetings of these agencies can run several hours or more, making it difficult for working people, parents and others to participate by speaking on agenda items.

Harris outlined the importance of continuing the telecommute platform for public meetings for those who cannot make it into the chambers. This comes after many endorsements of the policy have rolled in as well as the San Diego Union Tribune’s editorial board’s recent endorsement of the effort giving a nod to governments to adopt the policy.

San Diego Unified has agreed to begin their pilot on an in-house basis meaning staff will conduct the text messages for next Tuesday.  This open government texting notifications will make it easier for stakeholders to participate in online and hybrid board meetings.