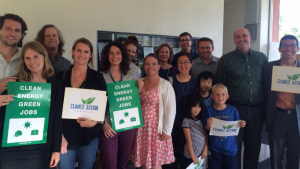 District to include study of community choice energy

Nicole Capretz, Executive Director of Climate Action Campaign and author of the City’s Climate Action plan, praised the action. "We applaud the school district for using the City of San Diego's draft Climate Action Plan as a model for its own because San Diego's plan will make us a world leader on climate action,” she said, adding, "The CAP gives San Diegans more transportation options and will create a 100% clean energy future."

The Parent Teacher Association last year identified climate change as a children’s issue, with the school board adopting a resolution in December in support of the PTA Climate Change Initiative.

Kath Rogers of Climate Action Campaign said the climate watchdog group is “thrilled that the school district recognizes that climate change is a children's issue,” adding, “The brunt of the health impacts of climate change will be felt by those who are already vulnerable, especially children."

A major goal of the San Diego Unified School District is to reduce energy costs while increasing usage of sustainable energy sources. Energy rates have increased 49.1 percent since 2009, according to the district.

If the district establishes community choice aggregation, it would enable it to purchase energy from more sustainable resources such as local solar, which would help achieve the City's goal of reaching 100 percent renewable energy by 2035.

San Diego Unified is also working to embed sustainability education for students and employees into everyday teaching and learning.