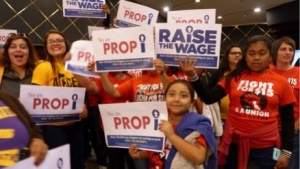 June 8, 2016 (San Diego) – By a resounding 63% to 37% margin, voters in the city of San Diego approved raising the minimum wage.  The ballot initiative also mandates 40 hours of paid sick leave a year for full-time workers.

Proposition I will raise the minimum wage by 50 cents immediately, to $10.50 an hour as soon as the results are certified. Wages will rise to $11.50 on January 1, then increase with the federal consumer price index on Jan. 1, 2019, and annually thereafter.

“We’re thrilled about Prop I,” Mickey Kasperian, head of the San Diego-Imperial Counties Labor Council, told East County Magazine.  “San Diego will be ahead of the state by two and a half years.”

The governor could suspend increases during economic downturns, however, a provision that is not in the city’s measure.  State law also does not provide the increases tied to inflation that the city measure provides.

Rev. Shane Harris with the National Action Network in San Diego, which canvassed districts to get voters to the polls in support of the ballot initiative called the action “historic.”  He added, “This is a big step, but we need to keep going until we get to $15 an hour.”

.... is that the voters think the Government has the knowledge to set the minimum wage. Every single government program is over budget and in-efficent. Medicare fraud and the VA are but 2 examples of how the Government is unable to manage any program or industry. Since they took over the medical insurance business prices, of the Affordable Care Act, have skyrocketed.
In spite of that the dumbed down voters now want the San Diego County Government, with all it's pot holes and broken water and sewer lines, TO TELL PRIVATE INDUSTRY HOW MUCH TO PAY IT'S EMPLOYEES?
I, for one, know exactly why our country is in such du du. Stupid lazy uninformed voters who put these clowns in office.
GO TRUMP!