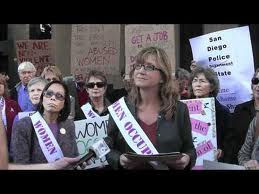 March 6, 2012 (San Diego)--Women from all over San Diego County will rally in front of the US Federal Courthouse, 940 Front Street in San Diego on Thursday, March 8 from 12-1 p.m. to support women's rights to contraception on International Women's Day.

Jennifer Coburn of Planned Parenthood will deliver a keynote speech. Entertainment will be provided by East County comedian Diane Jean (heard on my 1079.com on Thursday from 8-10 p.m.) and the Occupella Chorus of Women Occupy San Diego.The rally will address a number of recent attacks on a woman's right to contraception and family planning, including:
International Women's Day has been observed since the early 1900s on March 8.  Every year, thousands of events are held throughout the world, including political rallies, business conferences, government activities and networking events aimed at inspiring and connecting women.
The San Diego event is co-sponsored by Women Occupy San Diego and Planned Parenthood.