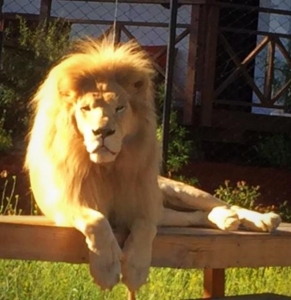 April 5, 2017 (Alpine) -- Bobbi Brink, Founder/Director of Lions Tigers & Bears (LTB) - an accredited big cat, bear and exotic animal rescue sanctuary, in San Diego County, Calif., and her team are making their way to the Los Angeles area to pick-up and transport a white male lion and two female lions to their new home at LTB.

"We have been working around the clock to finish their bedrooms so we can bring them to their new home," states Brink. "We are building them temporary runs while we continue to raise funds for the fencing necessary to complete the habitat." Upon arrival at LTB, the lions will be put in quarantine where they will receive physicals and have blood and other lab samples taken. This quarantine is standard for all animals arriving at LTB and will ensure the lions have no medical concerns that need to be addressed.

Lufuno (Louie), a 12-year-old white lion, and 14-year-old sisters Arusha and Zulu will be making their public debut on May 20that the Lions Tigers & Bears annual fundraiser, Wild in the Country.

White lions are a result of a rare color mutation of the Timbavati area of South Africa. Despite their name, white lions are not albino.

Louie and the girls were forced to perform in many live shows for a circus. With more restrictive laws being placed on the animal entertainment industry, many animals formerly used for entertainment like Louie, Zulu, and Arusha are in need of new homes.

In exchange for providing a lifetime home for these lions at LTB, the lions' former owner has agreed to sign a contract stating that he is permanently retired and will never again own, exhibit, or work in the exotic animal entertainment industry. In order to make sure these beautiful animals never have to "sing for their supper" again, Lions Tigers & Bears has taken over the financial burden of caring for Louie, Arusha and Zulu.

"We are committed to giving these lions a great home where they will be well-cared for... for the rest of their lives," states Brink. It will cost LTB about $10,000 per year per lion to provide basic care: food, water, vaccines, and flea control. This is not including the cost of maintaining their habitats or major medical expenses.

The LTB rescue team are transporting Louie, Arusha and Zulu to their sanctuary in Alpine, arriving April 5th.

Lions Tigers & Bears (LTB) is a federally and state licensed non-profit 501(c)(3) rescue facility dedicated to providing a safe haven to abused and abandoned exotic animals while inspiring an educational forum to end the exotic animal trade. LTB is one of the few sanctuaries in the United States with the highest level of accreditation from the Global Federation of Animal Sanctuaries and the American Sanctuary Association.