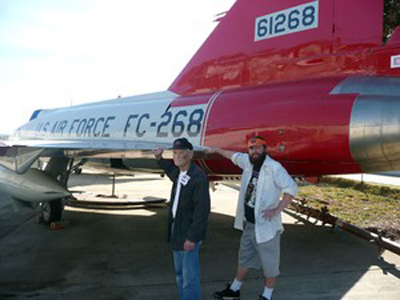 April 22, 2019 (El Cajon) - Near the northwest corner of Gillespie Field is an annex of the San Diego Aerospace Museum, where visitors can hear lore and legends about aircraft from people who, in some cases, made them originally or who are helping to  estore them to museum quality.

Among the volunteers is Don Simmons, 84, a former Convair employee, who helped to build the wing assembles of F-102 fighter aircraft such as one that is displayed on the tarmac near the museum’s hangar. On a recent weekday when his adult grandson Justin was visiting from Modesto, California, Simmons brought him to Gillespie Field to show him one of the ways he has been enjoying his retirement.

It’s not the F-102 that has been preoccupying Simmons, but rather a Corsair that the museum lists as an AU-1, but which some enthusiasts suggest more properly should be designated an F4U-7. Whichever version it may be, it has a proud heritage as a high-altitude carrier-based, propeller fighter that usually walloped the Japanese Zeros and later North Korean fighters in aerial combat. It also was flown from U.S. land bases in the Pacific.

This particular Corsair came to the Aerospace Museum for restoration after Hurricane Katrina of 2005 caused the waters of the bay near Mobile, Alabama, to surge, sweeping the plane back into waters behind the museum battleship USS Alabama. The Corsair suffered severe damage from the impact and also from salt water corrosion caused by its 16-hour nightmare in the hurricane-tossed waters.

Simmons spends Thursday mornings lovingly working on the Corsair wings which folded up to maximize space on an aircraft carrier. Some of the hurricane-wrecked Corsair’s parts were so damaged that new parts had to be made in the museum’s machine shop.

“The hinge for the wing was right there,” he told his grandson Justin. “There is a hydraulic piston in the wing that pushes the thing up."

Walking around the project on which he has spent more than a year, he added, “The story goes that the Navy didn’t like this plane, but the Marine Corps loved it.”

“And they made a legend out of it!” added a smiling Justin.

When Simmons began working at Convair in 1951, he worked on the Convair XFY-1 Pogostick, so named because it was an early version of a VTOL (vertical take off and landing), He  later moved over to the F-102, which underwent numerous changes during is course of development and manufacture.

Running a hand along the side of the F-102 to emphasize its contours, he explained, “they change the shape of its fuselange to make it more aerodynamic.”

At Convair, he said, different parts of the planes were assembled by specialty teams, his own being the frames of the wings. Fuel tanks later would be fitted into the  wing structure, so that “most of the wing was all fuel.”

Simmons worked at Convair 35 years, retiring in 1986. He not only made airplanes but also built rockets.

Although an octogenarian, Simmons is not nearly the oldest of the volunteers — as some of the men who work on the restorations are nonagenarians. Simmons jokes he is still a kid compared to some of them.

Jeff Eads, the 47-year-old facility manager, said although he has a paid position now, he had started some years ago as a volunteer wanting to learn about airplanes from the retired workers like Simmons who had manufactured them.

Having himself worked in construction (kitchen and bathroom remodeling) and having always been interested in airplanes and boats, he said he was drawn to the museum annex after moving to El Cajon.

“I grew up with people who are good with their hands, and to be able to come in every day and work with these volunteers is a real privilege,” he said. “Some of them are grandfatherly, some are fatherly, some are like brothers and then there are the cantankerous old uncles.”

He said the stories the volunteers tell–both about building the planes and flying them–are now being collected on video tape.

Airplanes from the San Diego Aerospace Museum in Balboa Park are rotated in and out of the annex if they need repairs. “These guys can take almost any basket case (like the Corsair) and turn it into a nice piece of work,” he said.

The Corsair  “has always been my favorite airplane because of the looks of it: it has lines you don’t see on any other airplane. We’ve been waiting for a Corsair for a long time–it’s a feather in your cap if you can get one into your collection.”

Another project which Eads considered special was the restoration of the museum’s reproduction of “The Spirit of St. Louis,” flown in 1927 by pioneer aviator Charles Lindbergh non-stop between New York and Paris — the first such trans-Atlantic flight.

While the original — “or what’s left of it” — is in the Smithsonian National Air and Space Museum, the re-creation of the plane was done by builders who were involved in creating the original at Ryan Aircraft in San Diego. The old timers even put their autographs inside the engine compartment.

Eads recounted that a mob of souvenir seekers crowded around LIndbergh’s original plane soon after he landed in Paris, each wanting to take a small piece of the historic airplane home. The result that the plane was not deemed air worthy and had to be shipped back to America in a crate, rather than flown as Lindbergh had planned, Eads said.

So, the local version of the “Spirit of St. Louis” — maybe it should be called “The Spirit of San Diego” — has its own bonafides.

While 90 percent of the 70 or so volunters are retired aircraft workers like Simmons, Eads said younger mechanics and engineers are beginning to find their way to the facility. He said students from San Diego State University, construction workers and even some high school students come for the same reason he did — to learn from the previous generation.

The kind of volunteers who are wanted are “people who have an eye for detail and a sense of history,” he said.

The workers pride themselves on their meticulousness. “We looked for six months just for the color of blue that we are going to paint the Corsair,” he said. “There are so many different colors and we are going to paint it with certain Marine Corps markings. You’ve got to get that color right, because I can assure you, if you get it wrong, there will be someone who will know.”

Visitors may come to the annex between 7 a.m. and 3 p.m. Mondays, Wednesdays, Thursdays and Fridays and examine the planes in the hangar and the tarmac. There is no admission charge. People who’d like to learn how to reconstruct aircraft may telephone Eads at (619) 258-1221.