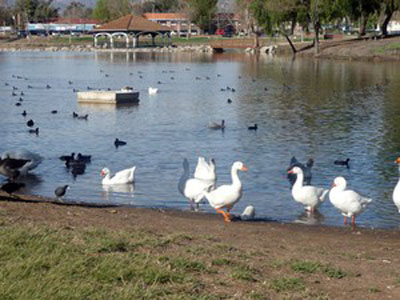 The water surface area is divided into two basins—the slightly larger west basin (12.16 acres) being more developed than the rustic east basin (11.34 acres). On the west basin one can find a restored boat house serving as a reminder of the elegant, four-story Lakeside Inn, which was built in 1887 and demolished in 1920 after a court ruled that the Gay family, which owned it, did not also own the eponymous freshwater lake.

Between 1904 when John H. Gay purchased the hotel and the 1920 court decision, the entire lake was treated as a special preserve for hotel guests, who generally arrived from San Diego by the San Diego-Cuyamaca Eastern Railroad. One can imagine properly-dressed ladies with parasols sitting demurely in row boats as their beaus manfully propelled the crafts across the water.

Boating no longer is permitted on the increasingly shallow lake, but the boat house can invoke that era when used as a dance pavilion for private parties or as a picturesque wedding venue.

Automobile racing—for which the park surrounding the lake once was renowned—also is a sport of the lake’s past. For those fascinated by the dawn of the automobile age, Lake Lindo has a special spot in history. Here on a 60-foot-wide track the barnstorming Barney Oldfield set another of the automobile speed records he regularly posted in exhibition races across the nation – driving his “Green Dragon” in April 1907 for the distance of one mile in 51.8 seconds.

Here’s a math problem to test the concept made popular by a current television show: just how smart are those fifth graders at the Lake Lindo Elementary School across Lakeside Drive from the east basin of the lake? If Oldfield covered a mile in 51.8 seconds, what was his speed, measured in miles per hour? The answer (with a help of a computerized calculator) is below.

Oldfield’s exhibition here, held on the weekend of April 20-21, 1907, pitted him against Bruno Seibel driving the “Red Devil.” This “match,” as it was called, had the overtones of a modern-day basketball “competition” between the Harlem Globetrotters and the luckless Washington Generals. Oldfield enjoyed building suspense for local audiences across the country, often promoting best-of-three automobile heats in which he would lose by fractions of seconds in either the first or second race, but come roaring back to victory in the climactic third race.

Whether the competitions were fixed or not, seeing automobiles cover distances at speeds greater than a mile per minute was a thrill for the early 20th century crowd.

No more boating, no more automobile racing—but, nevertheless, the lake certainly does not lack for exercise opportunities. In 2009, the County of San Diego utilized $200,000 from its park fund (paid by surrounding land developers) to install 17 exercise stations on the “peninsula” of Lake Lindo. Besides a stationary bike and a perpetual stair climber, the equipment includes an elliptical trainer and a power rower – all designed to provide “a full body workout through balance improvement and circuit training,” according to a bulletin of the County’s Park and Recreation Center.

Whereas many parks feature exercise stations located at intervals from each other, consultations with members of the Lakeside Planning Group persuaded county officials to group the 17 pieces of equipment together in an outdoor gym-like setting.

Randy Ford, the county’s district park manager, explained that the “idea was to create a community setting,” a place where people wouldn’t feel isolated. “They feel confident that they are safe, and on the peninsula they have a great view shed of the lake and the boat house.” From his vantage point in the community center complex on the shore of the lake, “I can see baby strollers, moms with kids, and even teenagers exercising,” he said during a telephone interview.

Walking around the lake is an ever-changing experience in terms of the waterfowl one might encounter. Different species of geese and duck are common, as are coots, herons and egrets.

Exercising, walking—this sense of Lindo Lake as a healthful place—is reinforced from 2 p.m. to 6 p.m. every Thursday when the north parking lot by the community center is transformed into a Farmer’s Market where the emphasis is on organic foods.

If all this sounds a bit too idyllic to be true, there are causes for worry below the surface – literally. Water from the lake seeps through the ground making it difficult, almost impossible, to maintain the water level, which Ford estimates is never deeper than 2 ½ to 3 feet.

The natural freshwater lake originally was fed by two tributaries to the San Diego River: Quail Creek and Los Coches Creek. In the late 1940s, the Chet Harritt Dam was built across Quail Creek, forming Lake Jennings behind it. Los Coches Creek—which can mean “The Hogs” or  “the Cars,” Creek, reminding some locals of Barney Oldfield, was realigned to make way for urban redevelopment.

This left Lindo Lake without a natural source of fresh water, except for rains and urban runoff. “We used to purchase water from Lake Jennings,” said Ford, “but recently we weren’t able to because of the water shortage.” Noting that there had been winter rains during January of 2010, he added: “The rain has been a blessing to us.”

Long-term, however, sufficient rain can’t be counted upon, and Ford said one proposal is to dredge the lake so that the water is centralized in the west basin, where levels could be more easily maintained. The east basin would be allowed to dry up under the proposal.

The lake is a pleasant attraction throughout the year, but one day that ranks among Ford’s favorites at the lake is Memorial Day (the last Monday in May) when the Veterans of Foreign Wars stage a giant celebration and military helicopters fly right into the park.

*Fifth graders: the answer to the question is that Oldfield’s speed was 69.498 miles per hour.