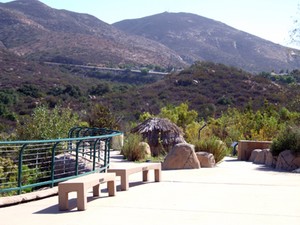 December 8, 2019 (San Diego) - There are some 40 miles of trails in Mission Trails Regional Park along the San Diego River and surrounding grasslands and mountains. Hikers can view Kumeyaay and Spanish archaeological sites, possibly encounter some endangered animals and some dangerous ones, and be introduced to plants with characteristics so interesting they almost have personalities.

The Kumeyaay Indians were indigenous to the San Diego area, establishing migratory routines here long before Juan Rodriguez Cabrillo claimed California for Spain in 1542. Not unlike modern retirees who spend their winters in warmer climates, the Kumeyaay in winter made their way from the mountains to the coastline, where temperatures were warmer.

The Kumeyaay followed the San Diego River back and forth between their summer and winter homes, setting up temporary campgrounds along the course of the river. At least two grinding rock areas are popular sites testifying to long-time use of the area by the Kumeyaay. At these locations, the Kumeyaay pounded acorns into a powder. Constant repetition of the process over centuries caused bowl-like depressions into the rock surface.

After Father Junipero Serra settled the region in 1769, the Kumeyaay were gathered to Mission San Diego, where they performed labor for the Franciscan padres and were given such names as “Mission Indians” and “Dieguenos.” One great task they performed circa 1813 was the construction of a cement, rock and adobe dam across the San Diego River and the laying of a gravity- flow flume that carried the fresh water to Mission San Diego nearly six miles away. The first dam on the West Coast of the United States, Old Mission Dam is a national historic landmark, well worth exploring.

At the visitor’s center, there are examples of Kumeyaay baskets woven so tightly from local plants that they can carry water. And, there is a re-creation of a Kumeyaay sundial. Chief Ranger Tracey Walker says there are more than two dozen known Kumeyaay archaeological sites in the regional park. To protect these sites against vandalism or trophy hunting, their exact locations are kept secret.To enhance understanding of the Kumeyaay way of life, Mission Trails Regional Park personnel have constructed and placed in different areas three ewaas—as the Kumeyaay’s temporary thatched lodgings supported by sycamore poles were called. With a small hole on top to let out the smoke, an ewaa provided a place to cook and sleep in relative privacy from animals attracted to Mission Trails Regional Park’s riparian environment.

The migratory Kumeyaay were hunters and gatherers, taking fish from the river, eating small game and pounding acorns into a powder from which they leached the tannin and then made into an oatmeal-like staple.

Among the birds of this area are two that are now endangered – the Least Bell’s Vireo and the California Gnatcatcher. The latter makes a mewing sound that might make you think that there is a kitten nearby. A bird of “concern,” though not formally endangered, is the Golden Eagle, according to Walker. They and other predators such as hawks and ravens may be spotted on rock cliffs overlooking areas that became part of the regional park complex after they were quarried.

The antics of the ravens can sometimes provide hikers with considerable entertainment. People who like to watch air shows will appreciate how ravens sometimes will perform “barrel rolls” and other aerobatic stunts, including dropping a stone or a nut from a high precipice and then zooming downward to catch it before it hits the ground.

Among predatory mammals in the area are coyotes, bobcats and an occasional mountain lion, one of which was spotted recently on the hunt not too far from the visitor’s center, causing enough concern that City Councilwoman Marti Emerald, whose district includes the park, cautioned people to avoid hiking alone and to wave their arms and make themselves look bigger in the event a mountain lion ever crossed their trail. Mountain lions typically would rather run than fight.

Mountain lions are territorial, with usually no more than one breeding pair occupying areas of 100 square miles or more—areas, in other words, that are far larger than Mission Trails Regional Park. Walker compared the chances of running into a mountain lion to that of seeing large sharks in the ocean. “Are they there? Yes. Is it likely you’ll see them? No.” To reduce the chances of danger even more, don’t walk alone in the park between the hours of 5 and 8, either in the morning or the afternoon/ evening, Walker suggested. “That’s when mountain lions go ‘shopping.’”

Coyotes and rattlesnakes likewise are dangerous animals, both of which would rather avoid humans. Walker advises people to hike on established paths and not go foraging into the brush, where animals may harm them or where they inadvertently may harm some of the sensitive plant species.

Near the visitor’s center’s amphitheatre is a demonstration path where you can see identified some of the plant species found throughout the park. Among them is the Toyon, also known as the Hollywood, which according to one widespread myth was the inspiration for the name of the famous movie town. The plant also is known as the Holly Berry, which sounds a lot like the name of a popular actress.

The California Wild Rose in summer blooms with pink petals and a yellow center. The Great Marsh Evening Primrose waits until dark to pop open its flowers, closing them up in the morning. The Lemonadeberry, just as its name suggests, can produce a “soothing drink” by soaking its sour berries.

Some plants provide wondrous examples of adaptation. The seeds of the Chamise, for example, are most likely to germinate after a fire. Seeds of the Mission Manzanita, on the other hand, do best after making a trip through a coyote’s digestive system. Ugh.

One endangered species is the Arroyo Willow, which has seeds so small it takes three million of them to weigh one pound, according to a brochure put out by the park staff. Another curiosity is the Flannel Bush, named for the flannel like fuzz on its flowers. Note to historians and to Republicans: the man who discovered this species was the great California “pathfinder” John C. Fremont who was the brand-new Republican party’s first nominee for President in 1856 and also was one of California’s first U.S. senators.

As trails wend their way through the park, one good way for hikers to keep their sense of direction is to look at the mountain sides. Those that are facing north generally have more vegetation than those that face south owing to differential sunlight.

Oh, and when you see plants in the summer that are dried and barren of leaves, don’t make the mistake of assuming that they’re dead. According to park brochures, it is more likely that they are simply dormant, having shed their leaves in an effort to conserve water.