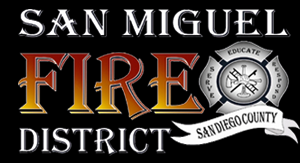 April 10, 2015 (Spring Valley)--In spite of tight finances and the looming possibility of a separation and divorce from CALFIRE, the San Miguel Fire Board of Directors majority went forward with a staff recommendation to purchase two new fire engines at its March 11th meeting.  The Board also took action on the County's proposal to takeover an unfinished training facility that has languished due to lack of funds.

With an out-the-door sticker price of nearly half-a-million dollars for each engine, the purchase is being piggybacked through a vehicle purchase program coordinated through the Riverside County Fire Department. Riverside’s department has placed an order for 20 apparatus and the CALFIRE Academy is purchasing two engines under the same contract. According to information obtained by the San Miguel Fire District, the engines are similar to trucks being used by the Lakeside Fire District. Delivery of the new apparatus will be approximately 330 days. The vote was unanimous except director Theresa McKenna voted no and director Karrie Johnston was absent.

The board also unanimously approved moving forward to explore a proposed takeover of a partially-built firefighter training facility in Casa De Oro by the San Diego County Fire Authority. Initiated by former San Miguel Fire District fire chief Augie Ghio in 2007, the almost four-acre training facility (to be operated jointly with the Heartland Fire Training Authority (HFTA)) had been intended to help meet the training needs of multiple fire districts in the unincorporated areas of San Diego. It was to have provided a full range of emergency services and public safety training venues, including fire rescue, emergency medical services, trench and confined space, hazardous materials, high-rise, classroom and mobile training.

Although the SMFD and HFTA received over $2.7 million dollars from the Barona, Sycuan, and Viejas bands of the Kumeyaay Nation, the Otay Water District, Sempra Energy (SDG&E), and Motorola, to build the first phase which was completed In June 2012, the San Miguel and Heartland districts have both lacked the funds to develop the remainder of the project to completion. The site currently includes only concrete, fire hydrants, props and a bridge overpass. Despite the facility sitting on land owned by the Otay Water District for which a 30-year lease was signed, it is still not operational due to the lack of a water meter.

To cover the cost of finishing the remaining two building phases and then open the facility, local governments that make up the HFTA have been challenged to raise some $1.5 million dollars (not including facility maintenance). Costs for minimal improvements required to use the training site total about $1 million for a water meter, water recovery system, Campo Road improvements, paving of an access road.

Correction:  An earlier version of this story stated that director McKenna was absent; in fact she was present and voted against the fire engine purchases.. In addition, we have clarified that the vote on the training facility approved exploration of allowing the county to takeover the facility.

Colossal waste of taxpayer money. A legacy of the Augie Ghio, Chris Winter, Dave Rickards reign of stupidity at SMG!