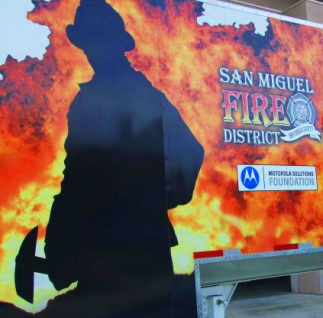 April 3, 2017 (Spring Valley) – A petition to recall three members of the San Miguel Consolidated Fire District board  has been axed by Registrar of Voters Michael Vu for failing to comply with formatting requirements. The proponent, Robert Cederdahl, a former member of the board in the 1990s, did not submit amended forms by deadline, so the recall effort is up in smoke before any petitions were circulated for signatures.

Cederdahl had sought to recall directors Theresa McKenna, Jim Ek and Mike Vaccio.  All three had voted to cancel a multi-million-dollar cooperative fire protection agreement with Cal Fire.  With the recall up in smoke, the Cal Fire agreement will end in July, returning the district to free-standing status.

Cederdahl and his backers wanted the district to stay with Cal Fire. He claimed that an in-house study on costs was inaccurate and had pushed for an independent study that the three board members declined to fund.  His petition states the cost of returning to a free-standing district is “over $1 million and climbing.”

The recall notice also objected to the three directors backing use of Heartland Communications at an estimated $867,506 instead of the Cal Fire/San Diego County Fire Dispatch Center in Rancho San Diego, even on a year-by-year basis.

The district went with Cal Fire for fire protection services initially during the recession when property tax revenues had dropped sharply, forcing closure of a station and threatening additional future cuts in services.

Advocates of returning to a free-standing district assert that the district now has sufficient reserves to restore local control.  Under Cal Fire, firefighters worked longer shifts, which some contend can lead to fatigue putting safety of firefighters and potentially the public at risk.  Through the years, the old and new boards’ actions have pitted San Miguel Firefighters Union members against Cal Fire firefighters.

A recall notice would have required 10,000 signatures for each director in order to appear on the ballot.  Cedardahl told the San Diego Union-Tribune that he does not plan to start a new recall effort and will instead wait until the 2018 election to seek change.

By then, barring any unforeseen changes, the Cal Fire contract will be history, with the district once again independent, operating under a new Fire Chief selected by the current board.

The board has taken some steps to reduce spending, including canceling construction of a planned fire station on Pepper Drive. The district, one of the largest in East County, covers 57 square miles including unincorporated portions of El Cajon and La Mesa as well as Spring Valley, Casa de Oro, Mt. Helix, Rancho San Diego, Bostonia, Crest and Dehesa.

One remaining variable is a report being prepared by the San Diego Local Agency Formation Commission, or LAFCO, on the costs of leaving Cal-Fire, move some contend will result in savings, while others fear it could again put the district in hot water with inadequate fiscal reserves.