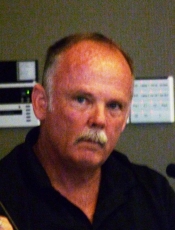 April 25, 2012 (San Diego’s East County) – Despite unanimous testimony by the public and firefighters in opposition, the San Miguel Consolidated Fire District board voted 4-3 tonight to enter into negotiations with Cal-Fire and with labor to turn firefighting services over to the state agency. 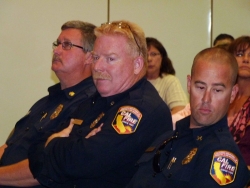 Firefighters Local 1434 and the Fire Management Association have put forth an alternative proposal that they believe would save $1.6 million to $2.2 million. Some Board members argued that the District negotiate with its union to hammer out a solution, as well as taking some cost-savings ideas from Cal-Fire and have the District implement them itself.  The public offered suggestions as well, but by a slim one-vote margin the Board opted to move forward into negotiations—though not yet a final deal.

Board members offered these explanations for their votes.

“What they did tonight is unconscionable,” Criss Brainard told ECM after the vote.  “We don’t have to pull this trigger yet.” He praised labor for coming forward with three proposals in writing and said there were many good suggestions.  He urged the Board to “sit down at the table” with labor. He also said savings would be significantly lower than $3.2 million once transitional costs are determined.  “Going with a state agency is not what this agency should do,” he said, adding that experienced firefighters will be lost. 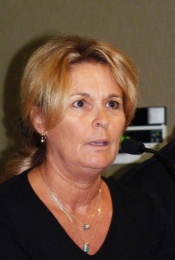 Karrie Johnston agreed “wholeheartedly” with Brainard.  “I do not trust the state of California,” she said, adding that she has Cal-Fire employees in her own family.  She voiced concern over losing Heartland dispatchers. She also expressed concern for Crest, which joined San Miguel’s district because residents of Crest, which burned in recent wildfires, did not want Cal-Fire to handle their fire services.  “I will never vote for this,” she said of the RFP with Cal-Fire, adding, “If it happens, I will ride Cal-Fire like Seattle Slew.  I will be your worst nightmare.”

Dave Rickards said he found the decision “extremely troublesome.” He praised union members for allowing non-union reserve firefighters to ride their rigs in order to provide some level of fire service to residents near Station 23, which had fire services cut due to the budget in November.  But said Rickards, who voted in favor of the measure, “Time is running out.”

Jeff Nelson voiced concerns that while San Miguel has battalion chiefs 24 hours a day, 7 days a week in the district, Cal-Fire would only be required to have a battalion chief living within 20 minutes of the edge of the district.  He also voice concerns over dispatch funds and loss of local control, as well as potential increases in a state-mandated fee.  “I couldn’t in good conscience turn my back on what the community wants and what firefighters want, and what I feel I was paid to do—which is manage this district.”

Chris Winter, Board President, called Cal-Fire a “great organization” and cast the deciding vote for the motion.  He faulted labor for not conceding enough to fill the budget gap.  “We as directors were elected by the people to manage this district. We’ve made some bad decisions; I guess we’ve been to nice. But we have to fix this now.”

Larry Jackman cited the “looming deficit” and noted that the District won’t know how much actual savings would be until it enters into negotiations with Cal-Fire and labor on transitional costs.  He made the motion to begin negotiations.  “This does not mean we are approving a contract. That’s months down the road,” he added. 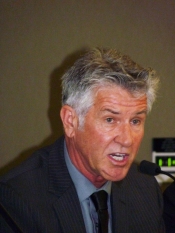 Rick Augustine said reserves have been spent down to “critical levels” and faulted the firefighters’ union, also citing plummeting property tax revenues that are the district’s main source of funds.  He said he’s talked with people in agencies elsewhere in California that Cal-Fire has taken over and says he’s heard positive feedback.

Fire Chief August Ghio has announced his intent to retire May 15, a move that could in theory allow the district to save money by hiring a replacement at a lower salary since Ghio was among the most highly paid chiefs in the county.  But with the district in disarray, finding anyone willing to fill the slot would be difficult, Brainard told ECM.  If the Cal-Fire proposal is approved, however, “the district won’t need a chief,” public information officer Leonard Villareal noted.

Testimony by community members offered a variety of suggestions—and unanimous opposition to turning over fire services to Cal-Fire.

Kim Raddatz, former Coronado Fire Chief, urged the board to reject the Cal-Fire proposal.  “There’s practically nothing in the RFP that you can’t do with your local agency,” he said.  “The community wants local control.” 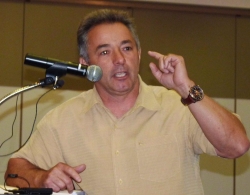 Victor Mosso, a resident, voiced concerns that “my family, my house is at risk because you can’t fight fires.”  He wants to see pay and benefits reduced, but the district kept intact.

El Cajon resident Jeff Lundstrom said he’s uncomfortable having the state in charge of fire protection for our region.  “When they go on calls for wildfires in summer, who’s going to protect my house?”

Although voters previously rejected a fire parcel fee, El Cajon resident John Reveles stated, “I think everyone would prefer to raise taxes than to go with Cal-Fire.” He asked the Board to start a community committee and “if all else fails, give a choice to voters and let us decide.”

Betsy Walker, a firefighter’s wife, said she would be willing to help organize volunteers to save the district money on tasks such as landscaping and painting.

Miriam Raftery, ECM editor, offered to publicize fundraising efforts for the district and suggested a nonprofit foundation be formed.

After the decision, community members voiced concerns –and one, who declined to be named, suggested that a recall of fire board members should be commenced.

The Board also drew controversy over its recent decision to reduce retiree health benefits and voted to table a measure to reinstate them. 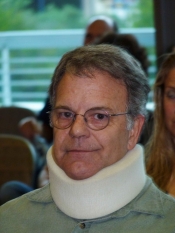 tcher of Rancho San Diego said retirees are filing papers with California’s Secretary of State to form an organization. He contends the change is “immoral, unethical and illegal” adding that the move could cost some retirees an extra $300 for medical benefits, causing “severe hardship.”

Barry Alsobrook, a retiree wearing a neck brace, rose to denounce the cuts.  “After 34 years on the job, now I have steel screws in my neck,” he said. He objected to the district’s public information officer “spending five years pushing paper, and now he gets lifetime benefits.”

David Allan, former president of the San Miguel Firefighters local and current La Mesa Councilman, said the board should “take care of your retirees” and “do the right thing.”

Legal Counsel said the board needed supporting documents such as the memorandum of understanding. 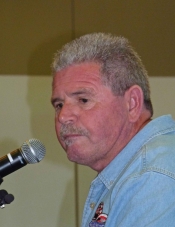 Allen insisted he has given papers to the Board and that Board members who were there when the benefits were initially bestowed did not intend them to be temporary.  “Let’s all chiop in for a lie detector test and all the board directors would fail it,” he challenged.

Brainard agreed that was the board ‘s intent . “I think we should restore the benefits unless we have a legal reason we cannot,” he said.

Johnston, who wasn’t on the board at the time, also supported restoring the benefits.   Nelso also voted to restore retirees’ benefits.  But the motion to table that restoration passed 4-3.

A motion for overtime to assure adequate staffing at Station 23 also failed by a 5-2 vote, with Brainard leading arguments for the funding.  He voiced concerns over lack of cohesiveness , adding, “essentially you’ve got a rookie all the time…It’s unconscionable. We need full staffing back at Station 23.” 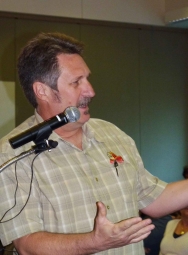 The Board voted unanimously, however, to authorize disability retirement for Captain Alan Laatsch, a 25-year veteran firefighter and head of the firefighters’ union, who was injured on the job.

Firefighter/paramedic Nick Williams praised Captain Laatsch as “one of the morst universally respected firefighters…We are all losing a great deal.”

Board President Winters asked the crowd to give Laatsch a standing ovation, and the audience readily complied.

"I've enjoyed my career here," Laatsch said, his voice choked with emotion, "and I'm very, very proud to be a San Miguel Firefighter.

It's doubtful how many others will be able to make that claim in the future, ironically, if the district turns over firefighting services to the state.

Where was Lennie at? I'm surprised Augie and Lennie weren't there to make sure Lennie gets his benefits for life for working part time for 3 years doing nothing and making $85,000 a year.

Disabled firefighters fighting for their benefits and Leonard Villarreal thinks he deserves his because Augie (his neighbor) got him the job. How can this man even sleep at night?

He's got lifetime benefits! Not a worry in the world! Why didn't he have this from one of his other news gigs?

This move to contract with CalFire is horrible! The only good news is the word that the Chief is leaving soon, quickly really, on May 15th, abandoning the ship he has slammed into the rocks, like the Captain of the Costa Concordia (the Italian cruise ship).

I wonder what might be uncovered once he leaves?