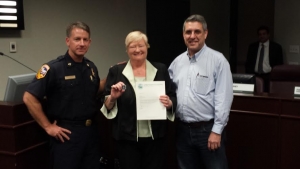 March 1, 2015 (Spring Valley)--After a couple of months getting familiar with their responsibilities and getting used to a trio of newly-elected colleagues, the San Miguel Fire District Board began to get down to business at its regularly scheduled monthly meeting on February 11 at the district headquarters in Spring Valley.

The main order of business was a resolution which would have the District annex the area bordered by Pepper Drive in El Cajon, which passed unanimously.

The annexation is a part of continuing wrangling involving a combined plan which would annex and reorganize the San Miguel Fire District and the Lakeside Fire Department within one designated County Service Area governed by the San Diego County Board of Supervisors.

The deal is being managed under the auspices of San Diego Local Agency Formation Committee – or LAFCO – whose main objective is to effectively streamline government services.  San Diego LAFCO is governed by eight regular members: two members from the Board of Supervisors, two city representatives, one City of San Diego representative, two special district representatives, and one public member, who is appointed by the other members of the Commission.

Further discussion took place dealing with the district’s CalPERS (California Public Employee Retirement System) unfunded liability payment, the possibility of returning to a local control of the District from being an agency of CALFIRE, and preliminary discussion about the acquisition of a new firefighting truck.

The Board also voted to open up its Finance Committee meetings to the press and public, as East County Magazine requested, by making it a standing committee instead of an ad-hoc committee.

Longtime San Miguel Fire District Recording Secretary, Nancy Roos, was recognized by the board for fifteen years of service to the district.

So now San Miguel Fire has purchased a parcel in the Lakeside Fire Protection District for a proposed replacement for the Bostonia fire station. This despite the fact that residents in Bostonia (and Crest) pay the highest fire protection fees in the entire county! This relocated San Miguel station is merely 1800 yds. from the long-planned relocation of Lakeside fire station 1. Come on East County Magazine, lets get on this story! http://sdlafco.org/Webpages/csa_115_reorg.htm http://sdlafco.org/Webpages/csa_115_reorg2.htm
San Miguel did not annex anything. They are requesting LAFCO "initiate proceedings" that would allow the district to increase their sphere of influence AND annex CSA-115 Pepper Drive area which is currently under contract with the City of Santee fire department for structural fire protection and emergency medical services. The 0.7 square mile CSA generates around $300,000 in tax revenue. Interestingly, the part of the San Miguel Fire District that borders CSA-115 is itself an island not connected to the other contiguous areas of the fire district. Ironically, if the annexation does go forward, residents in CSA-115 would receive service from the same agencies that serve them now, i.e., Santee, El Cajon, San Miguel, and Lakeside. For a fire call,typically, San Miguel would supply only one resource (engine company) as the next closest district stations are in Crest and Rancho San Diego, too far to travel for a structure fire! Lakeside Fire District is also interested in annexing this area. An annexation into their district would create a contiguous service area (not an island) easily serviced by the long-planned relocation of the Riverview fire station (fs1) to the south end of the distict.