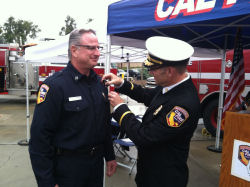 “The transition creates a new generation of cooperation, through a reduction of redundant staff positions while maintaining firefighter staffing at all 8 Fire Stations,” a press release issued by San Miguel Fire District states.

On September 25, 2012 The San Miguel Fire District Board voted unanimously to approve a five and a half-year agreement. Board President Chris Winter said, “This cooperative agreement allows the District to proceed with a balanced budget, maintain the current level of service for our residents and provide for the long-term viability of the District.”

The District made the decision following a series of community meetings in an effort to stem its budget gap in an era of diminished property taxes.

The symbol of the Firefighter’s Badge is the Maltese Cross, a symbol of protection. It means that the firefighters wearing the cross are willing to lay down their life, if need be, to protect the lives of others. It is certainly a firefighters’ badge of honor, denoting courage, training and the ability to work at death’s door. During this colorful and moving tradition, family members of the newly welcomed firefighters pinned the badges on their loved ones