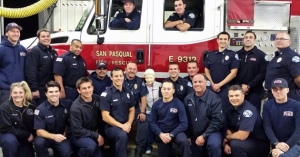 Supervisors insisted that fire and medical services for the community will not be negatively impacted. The San Pasqual department has provided mutual aid to help fight fires countywide, including conflagrations in East County, such as the Vallecitos Lightning Fires, according to the district’s website.

The water was delivered in a water tender being used to train volunteer firefighters and taken to Tom Carter, who had offered to pay the department for it, said Dilts, who made what he now calls a “poor decision.”  Dilts already paid a $10,000 fine to the city of Poway for the theft, which was caught on camera by a Poway public works department employee, UT San Diego reported.  The truck, which holds 2,500 gallons, reportedly made several trips.

The Department has claimed it thought Carter had a permit. Dilts has claimed he was merely trying to help a community member in need and called his action “an honest mistake.”

But Supervisor Dianne Jacob, chair of the Board of Supervisors, disagreed. She stated, “We can no longer rely on the leadership of the San Pasqual District.” She noted that stealing water from a public hydrant to fill a private well is a crime.

Chief David Davis, who formerly headed the San Pasqual District, was removed several months ago. After his removal, the board sold him a 1996 Surburban vehicle with 200,000 miles on it for just one dollar.  The San Pasqual representatives had said the Surburban needed numerous repairs. However even scrap metal value would be significantly more than a dollar on a typical vehicle. Davis has offered to return the vehicle—which he says would have to be towed away.

The Department’s website states that its mission is to serve the community with integrity and ethics. That mission is now forever tarnished by the actions of its leaders.

The dispute over water rustling by the San Pasqual Fire Department comes at a time when California is facing its worst drought on record and water is a precious commodity.

At Tuesday’s meeting of the Supervisors, the county’s general manager of its public safety group, Ron Lane, made clear that water rustling by firefighters entrusted to protect the public will not be tolerated.

“These investigations determined that the leadership of the San Pasqual Fire Department committed a series of violations not only as contractors with the county but violations of law,” he told Supervisors, adding that the actions have been referred to the District Attorney for possible prosecution.

Shutting down an entire fire department because of the miss adventures of one board member? I wonder if the County has other motives? Wait, we know they do. They want to run everything. Campo will have 20 SDCFA dark days next month at the present rate. Lets see, doesn't something bad always happen in October? San Diego County budget 2014. Law Enforcement, 1 Billion dollars! County fire 15 Million dollars. Can you say Police State?