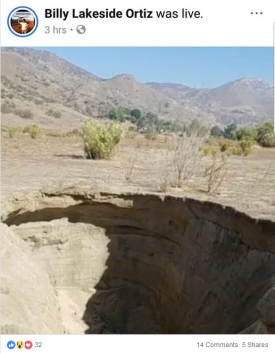 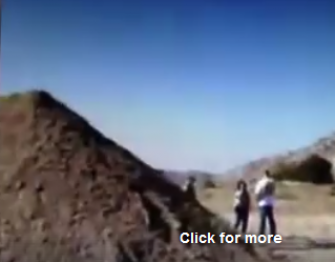 October 25, 2018 (Lakeside) -- The developer of the El Monte Valley Sand Mine is apparently is so sure the project will get approved he began digging Oct. 24 without a permit, but according to San Diego County he doesn’t need one.

El Monte Nature Preserve LLC, the ironically-named entity that has been seeking county approval for the mining operation on nearly 500 acres of land near Lakeside, sent a heavy equipment operator to the site Wednesday to  begin digging holes. That prompted several local mining opponents to block the operation.

Lakeside activist Billy Ortiz, an outspoken critic of the project, videotaped the digging activity and then plunked himself onto the skip loader that was being used before he was briefly detained by a Sheriff’s deputy called by the hired contractor.

Later, several other mine opponents showed up; one said she was pushed by a crane operator, and she filed a complaint with the Sheriff’s Department.

The operator of the heavy crane “came to me and pushed me, and threatened to hit me with the machine,” said Ana Nita, who is a freelance writer for several local publications, including East County Magazine. Video by Ortiz shows the operator telling Nita to move “or I’ll touch you with the machine,” later stating that he didn’t want her to be hurt.

According to a news segment on KUSI-TV broadcast that day, the digging was halted when local activist Teri Brigham notified the county, which got the operation shut down---but only temporarily.

When Ortiz asked the operator at the excavation site if he had a permit, he said the owner had one, another video by Ortiz reveals. But that’s not true.

County spokeswoman Jessica Northrup said in an email to ECM that a grading permit isn’t required for an excavation of less than 200 cubic yards. She said the county’s planning department conducted an inspection of the site Oct. 25 after reports of unauthorized grading were received, and based on the inspection, “there is no grading violation.”

Northrup said the property owner was obtaining sand samples “to assist in the manufacture of the sand washing equipment required for the proposed mine.”

The county code for grading allows for an excavation of less than 8 feet in vertical height which does not result in the movement of more than 200 cubic yards of material, Northrup said.

Later in the same email, she said some 170 cubic yards of fill was taken from a hole “of roughly 22 feet deep.” Yet she said that cut wouldn’t constitute a violation because “…while an excavation of more than 8 feet was completed, the activity did not result in a condition where more than 8 feet of cut remains exposed.”

Efforts to clarify the statement weren’t successful as Northrup didn’t return calls. The email concludes that the hole was filled and the current condition of the ground is flat.

Supervisor Dianne Jacob told East County Magazine via e-mail, "I’m certainly alarmed with this activity and disappointed with the property owner. I’m troubled that it didn’t trigger a grading violation and plan on following up with County staff to get a briefing on what occurred and what actions we can take if something similar is done in the future.”

The current condition of some 500 acres of land north of Lake Jennings off El Monte Road and Willow Road may not be long to survive. An EIR released in August reveals that 262 acres of the 479.5 acres will be in a “disturbance area,” and will have significant impacts to scenic vistas, as well as loss of known mineral resources of value to the region.

Besides that, the EIR addresses the potential health threat caused by the disturbance of soils containing Coccidioides spores, which can cause Valley Fever, a condition that can be fatal to certain folks with compromised immune systems.  On Facebook, some residents voiced concerns about children at nearby Oma’s Pumpkin patch who may have been exposed to dust from soil disturbed during the excavation.

Traffic and noise concerns are also addressed in the EIR, and both elements are considerable. The operation at maximum production will generate 462 truck loads daily entering and exiting the site, according to the EIR.

The land that contains the valuable aggregate used in the construction of roads and freeways was once planned as a golf course, but the leaseholders decided on a more profitable venture as a sand mine.

Last year, the property was sold to El Monte Valley Nature Preserve LLC for $8 million by the Helix Water District.

The EIR states the mining operation will excavate some 18 million tons of sand over 12 years, and use another four years to return the site to the condition it was in before the El Capitan Dam was built in 1935.

But hundreds of local residents, who packed a public meeting organized by the county earlier this month, voiced strong opposition to the project and raised major concerns about its impacts. Now that the EIR comment period is nearly over (as of Oct. 31) the document goes back for revisions and then goes to a vote by the San Diego County Planning Commission and ultimately to the full Board of Supervisors.