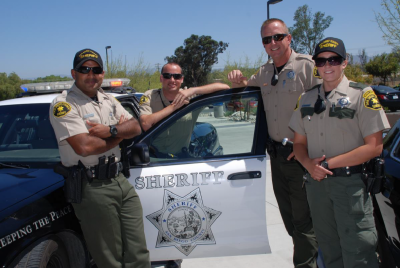 May 21, 2019 (San Diego) --  A new report by the San Diego Association of Governments (SANDAG) shows crime in all San Diego County Sheriff's Department patrol areas is down, though some other jurisdictions had increases. The Sheriff is responsible for all unincorporated parts of the county as well as several incorporated cities including Santee, Lemon Grove and Poway in our inland region.

The largest part of the drop was in property crime, which reached a 39-year low countywide. This is noteworthy considering the county's growing population.

Violent crimes dropped in jurisdictions covered by the Sheriff last year, but countywide remained steady from 2017. Over the past year, 9 jurisdictions had higher violent crime rates and 12 had lower ones, compared to 2017 (4 had numbers too small for valid comparisons). Lemon Grove had a significant one-year drop of 21% in crime overall from 2017-2018.

Looking at data since 2014, the most dramatic changes in East County were in La Mesa which had a 34% drop in crime; by contrast Spring Valley’s crime rate rose 15%. Other inland areas had changes in single digits.

Since taking office in 2009, Sheriff Bill Gore has championed Information-Led Policing as a crime fighting strategy that harnesses data and information from a wide range of sources to identify patterns, links and trends.

A press release issued by the Sheriff’s department states, “This actionable information gives us a better understanding of our beats while strengthening relationships with community members. We can make more strategic decisions in preventing crime because ILP gives us a better idea of where trouble may arise. Deputies can then begin a dialogue to dissuade crime or they will have a better understanding of the situation and potential suspects before responding to an incident. ILP puts crime fighters one step ahead of criminals. The result is safer neighborhoods.”

Sheriff Gore says, "It's about putting our resources at the right place and the right time. It's a game-changer for our deputies to connect the dots and stop the crime before it happens. Utilizing information-led policing is about enhancing our ability to provide service through a partnership with the community that builds trust, reduces crime, creates a safe environment and enhances the quality of life in our neighborhoods."

Sheriff Gore also credits the continuing drop in crime to the hard work and dedication of deputies, professional staff and and trust the collaborative efforts occurring within our communities, forging partnerships with people in communities served.

Criminals don't respect neighborhood boundaries, so local investigators and analysts also check with their counterparts in Riverside, Orange, San Bernardino and Los Angeles Counties for crime trends or series that might spread into our communities.

“A continued focus for 2019 will be to increase staffing in our unincorporated areas and improve our mental health services,” the Sheriff’s release states, adding, “We've made great strides with the creation of the Homeless Outreach Team and Alzheimer's Response Team in some of our patrol areas. Our goal is to make more positive connections with the homeless and offer them various resources to help improve their living situation.” 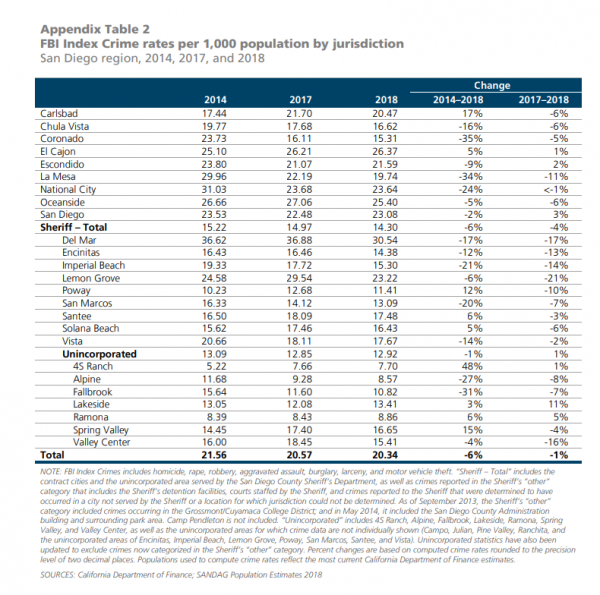