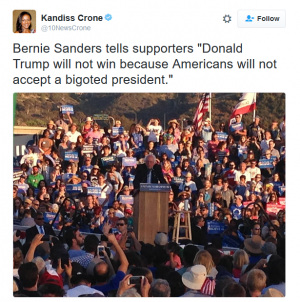 June 6, 2016 (San Diego) – At a concert and rally in Qualcomm’s parking lot Sunday, Vermont Senator Bernie Sanders told a crowd of around 4,500 supporters that Donald Trump will  not win in November, “because in the year 2016, the American people will not accept a bigoted president.”

Sanders told San Diego supporters, “Real change has never taken place from the top down, only from the bottom up.” He urged people to reject income inequality and billionaires seeking to “buy elections.”

Sanders trails Clinton by 289 pledged delegates, but  sees record voter turnout as the key to victory in California, urging supporters to vote. In California, 471 delegates are at stake.  Should Sanders beat Clinton here, he would face the daunting task of convincing hundreds of super delegates pledged to Clinton to shift allegiances.

With most national polls showing Sanders more apt to beat Trump in the general election than Clinton would be, superdelegates have plenty of food for thought. Meanwhile Minnesota's Democratic Party has called for an end to superdelegates at the July Democratic convention.

One wild card in play:  Many of Sanders’ support comes from independent voters.  Anyone registered as a decline-to-state party affiiliation in California must request a Democratic ballot if they wish to vote for Sanders or Clinton, otherwise they will be given a ballot with no presidential candidates listed.  (Republicans do not allow crossover voting in their primary.)

At Sunday’s rally for Sanders in San Diego, Rep. Tulsi Gabbard (D-Hawaii), an Iraq war veteran, called Sanders “leader who has made it clear he will end those interventionist wars, and use the resources to rebuild communities at home.”  The Senator has strong support among veterans, a key voting constituency in San Diego.

Musical concerts, a comedian, and a speech from philosophy professor Cornel West rounded out Sanders’ final campaign stop here.  The Senator previously drew thousands in rallies at the Convention Center downtown, in the South Bay area, and in Vista here in San Diego County.